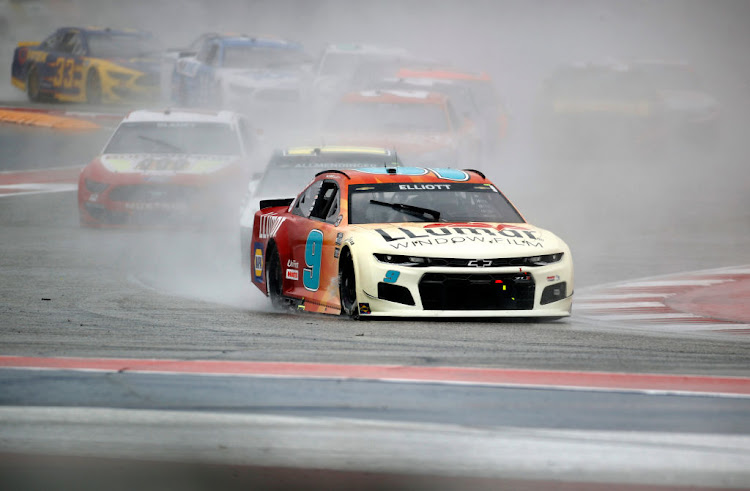 Chase Elliott, driver of the #9 Llumar Chevrolet, leads the field during the NASCAR Cup Series EchoPark Texas Grand Prix at Circuit of The Americas on May 23 2021 in Austin, Texas.
Image: Jared C. Tilton/Getty Images

Chase Elliott solidified his reputation as the king of the road courses on Sunday by winning the rain-shortened EchoPark Automotive Texas Grand Prix NASCAR Cup Series race at the Circuit of the Americas road course in Austin, Texas.

"I've never won a rain race before so  it's kinda cool."

Elliott was in the lead but in fuel trouble with 14 laps to go when heavy rain began to pour down and cause officials to decide the flooded surface of the 3.41-mile, 20-turn COTA course had become too dangerous to continue.

The victory was the Hendrick Motorsports driver's sixth overall and fifth in his last seven starts at road courses.

It was the first win of the season for the defending Cup champion.

"We've kind of had an up and down year," Elliott said.

"To come here and fight. Not the ideal way to win but we'll definitely take it and move on down the road."

Elliott said NASCAR made the right decision to declare the race over with 14 to go.

"There were some areas on the track that were getting really treacherous," he said.

"The back straightaway was puddling up and we were starting to hydroplane and do some weird stuff, so my only option was to send it through those spots and hope for the best."

Awarded second place was Elliott's teammate, Kyle Larson, who had more fuel left and was closing on Elliott when the final red flag waved.

Joey Logano of Team Penske, who led a race-best 14 laps, was third.

Tyler Reddick started the race from the pole after a rare race day qualifying session on Sunday morning. The pole was the first of the Richard Childress Racing driver's career.

"It's pretty well known  haven't been very good on road courses and I didn't want that to be my weakness any longer," Reddick said.

"I just focused during the offseason at being better. I put a lot of work into this, being better, and this whole team did a great job to help me get better."

The race started on a relatively dry track, but before the first lap ended, heavy rain hit and the result was ugly. The slick track combined with lack of visibility because of rooster tails of water coming off the cars caused several bad accidents.

A wreck on Lap 18 took out a number of star drivers, including Kevin Harvick, Bubba Wallace and Christopher Bell.

After getting out of the care centre, Harvick said: "We don't have any business being out in the rain, period. All I can say is this is the worst decision we've ever made in our sport that I've been a part of, and I've never felt more unsafe in my whole racing career."

Racing blind resulted in a scary wreck on lap 25 when Cole Custer hit Martin Truex Jnr so hard from behind that Custer's car ended up underneath the rear of Truex's. Custer's car then slammed into a wall and burst into flames.

"It's dangerous. You  go down the back stretch every lap praying there's nobody having an issue,. a crash or a car stopped or whatever because you are just wide open and can't see anything," Truex said.

Officials then red flagged the race and sent out track dryers. The cars were called to the pits where teams were allowed to clean windshields and apply chemicals that help shed water from the windshields.

Officials also announced all restarts would be with cars in single file.

The rain let up for a while but came back in force with 14 laps to go.

The next race on the Cup schedule is the traditional Memorial Day weekend Coca-Cola 600 at Charlotte Motor Speedway.

Charles Leclerc's Monaco jinx struck again on Sunday as Ferrari's pole-sitter retired from his home Formula One grand prix before the start due to a ...
Motoring
1 month ago