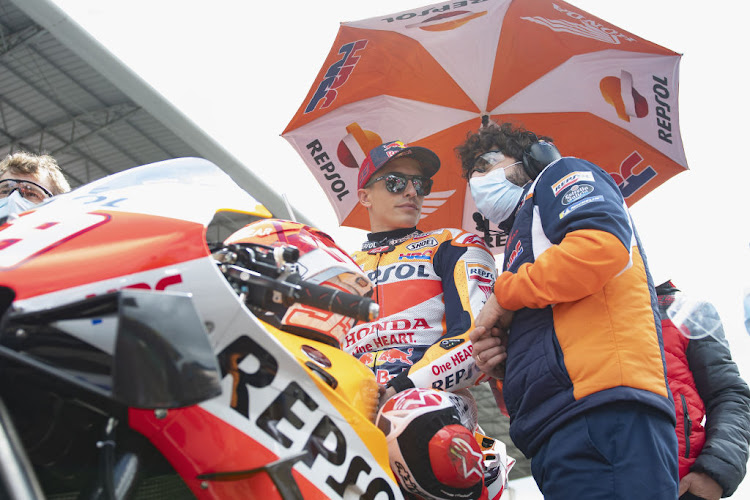 Marc Marquez prepares to start on the grid for the MotoGP of France on May 16 2021 in Le Mans.
Image: Mirco Lazzari gp/Getty Images

Six-times MotoGP champion Marc Marquez said on Thursday that he considered a break in racing after the Spanish Grand Prix as he struggled with his comeback from injury - but decided to continue after encouraging discussions with his doctors.

Marquez fractured his humerus in the 2020 season-opening Spanish Grand Prix in Jerez last July and did not race again all year, making his comeback only at last month's Portuguese Grand Prix, the third race of the season.

Marquez is well off the pace without a podium finish in three races, including a retirement in France, with the Spaniard saying he is not riding in an optimum position for racing because of the pain in his shoulder.

"There was a possibility after Jerez to stop again. We spoke with the doctors but, in the end, even the doctors said it was good to reintroduce (racing) in my life," Marquez told reporters ahead of this weekend's Italian Grand Prix at Mugello.

"The humerus is connected to the shoulder I had already had surgery on in the past and maybe it was not 100%, but was working well like in 2020 in Jerez.

"The humerus is ready to push. The pain is there always, the doctors say it is normal after a broken humerus, the shoulder or elbow is affected ... There are some things that are coming more from the shoulder that are disturbing me when I'm riding."

NASCAR indefinitely suspended Eddie D'Hondt, the spotter for the No. 9 Hendrick Motorsports team, on Wednesday after learning more about his arrest ...
Motoring
7 months ago

Australian Jack Miller will continue with the Ducati works MotoGP team next season, the Italian manufacturer said on Tuesday
Motoring
7 months ago

British barrister Graham Stoker on Tuesday announced his candidacy to succeed Jean Todt as head of Formula One's governing body, the FIA, with ...
Motoring
8 months ago