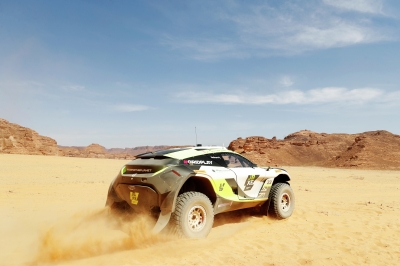 Jenson Button's JBXE team is partnered by Lotus Engineering, a subsidiary of the British sportscar maker, in a series that races in remote locations to highlight climate change and promote sustainability.
Image: Steven Tee / extreme-e.com

Team owner and 2009 Formula One world champion Jenson Button expects the new Extreme E off-road racing series for electric SUVs to see an influx of manufacturers in the next year or two.

Button's JBXE team is partnered by Lotus Engineering, a subsidiary of the British sportscar maker, in a series that races in remote locations to highlight climate change and promote sustainability.

A Lotus engineer joined the team last weekend for the second round in the coastal dunes of Senegal, with JBXE finishing third.

“It has to be a fantastic playground for manufacturers to really learn and prove out their systems. And it's a fun way to do it,” Button said by video conference from his home in Los Angeles.

“It's really good for Extreme E to have a manufacturer like Lotus and I think it will attract a lot more manufacturers.

“You will see the OEMs (carmakers) coming to the category, whether it's next year or the year after. And it will just grow very quickly when we see that happen.”

Lotus, owned by China's Geely and Malaysia's Etika Automotive, hopes to sell only electric cars by 2028, with a new plant in the Chinese city of Wuhan and “lifestyle” models expected to include an electric SUV.

Group Lotus PR manager Rob Borrett hoped the partnership would be a long one and said it was all about learning for the future.

“What better race series to be in from the beginning than Extreme E for us,” he added.

Volkswagen-owned Seat's Cupra brand is the other automotive manufacturer involved in Extreme E as a technical partner to Germany-based ABT.

The teams all use ODYSSEY 21 SUVs, manufactured by Spark Racing Technology. The French company also makes cars for the city-based Formula E series which has been embraced by leading manufacturers.

Formula One champions Lewis Hamilton and Nico Rosberg also have their own Extreme E teams but Button is the only one of the three also racing.

“I'm definitely on the back foot but for me it's all about learning, I want to do stuff that is challenging,” said Button. “However scary it is, I still want to race the car.

“In an F1 car you kind of know the limits ... With this thing, it can throw you through a bush. It might be OK but there might be a giant boulder on the other side. It's definitely a little bit scarier than F1.”

Kyle Larson put on a show in prime time on Sunday as he streaked to a dominating victory in the crown jewel Coca-Cola 600 NASCAR Cup Series race at ...
Motoring
3 weeks ago