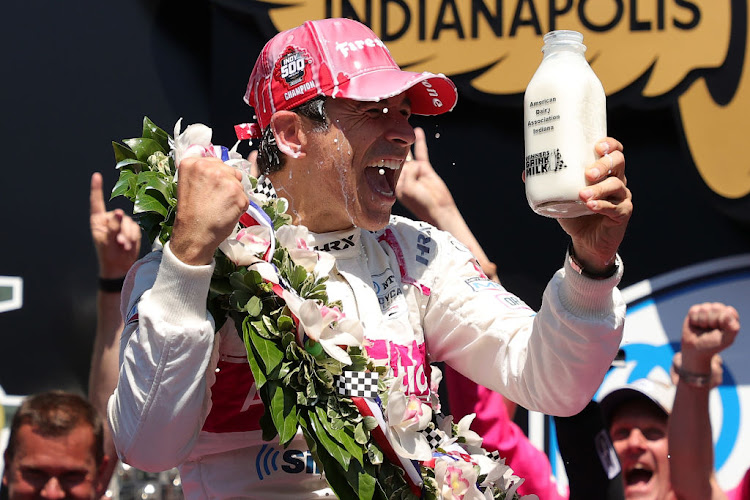 Helio Castroneves of Brazil, driver of the #06 AutoNation/SiriusXM Meyer Shank Racing Honda, celebrates after winning the 105th running of the Indianapolis 500 at Indianapolis Motor Speedway on May 30, 2021 in Indianapolis, Indiana.
Image: Stacy Revere/Getty Images

Castroneves went to the front for the final time with just two laps to go then held off Alex Palou to the checkered flag. He joined Al Unser Sr, Rick Mears and AJ Foyt in the Indy 500's four-win club.

The victory, in the No 06 Meyer Shank Racing Honda, came by 0.4928 seconds over Palou for Chip Ganassi Racing. Immediately after crossing the finish line with the victory, Castroneves flashed four fingers in the cockpit of his car and put his hand on his helmet.

“Oh man, it hurts, it hurts round here,” Palou, who won his first IndyCar Series race earlier this season, capturing the win at the Barber Motorsports Park road circuit, said while pointing to his heart. “This is the Indy 500. I cannot be angry about finishing second, but we had the car to win, we had the best car.”

The man they call “Spiderman” because of his signature fence climbs after victories, is driving just a six-race schedule this season for Meyer Shank.

He was removed from a full-time IndyCar cockpit by Penske after the 2017 season. He has spent the last three seasons racing for Penske in the IMSA sports car series.

Sunday's was his first IndyCar race of the season and may help him step back into the series on a full-time basis in the future.

“It's not the end of it. It's the beginning,” Castroneves said. “I don't know if this a good comparison or not but Tom Brady won the Super Bowl. ... and now here we go.”

The victory allowed the 46-year-old from Brazil to climb the fence on the front stretch one more time and share the moment with the fans at Indianapolis Motor Speedway. An estimated crowd of 135,000 was announced after last year's delayed race was run without a crowd.

It was considered the largest crowd for a sporting event since Covid-19 restrictions began in March 2020.

Pagenaud moved up in the season standings with his finish. “So what,” he said.

“I just want to win Indy. I really don't care about the championship,” the Frenchman said. “This is the one place in the world, this is the one race, you want to win. And second, third, it doesn't matter. It's just first place.”

“I really think we did a perfect race,” said O'Ward, who got his first series win at Texas this year. “I don't think we could have done anything better. We just needed to be faster at the end.”

Over the final 25 laps, Palou and Castroneves traded the effective lead. Two other drivers were in front of them but needed pit stops to finish. And O'Ward was right behind the duel for the lead with Pagenaud moving in towards the leaders with 12 laps to go.

With 16 laps remaining, Palou passed Castroneves and with seven to go Castroneves moved back in front. Two laps later, Palou took the lead.

With two laps remaining, Castroneves blew past Palou once more while approaching the first turn, while successfully contending with a crowd of cars in front of him.

“It was a good battle with Helio,” Palou said. “And I think it's better when you lose against the best in the business so, good job Helio.

“I didn't let him pass but once you get the good run, there is nothing you can do.”

Scott Dixon, who started on pole, saw his dream-like May turn into a nightmare on the first series of pit stops.

During those stops, which began on Lap 31, young driver Stefan Wilson spun and crashed on pit road. That closed the pits, leaving a handful of drivers stuck out on the track with fuel all but gone.

Dixon's Chip Ganassi Honda, which was in the lead, was one of those cars unable to pit. By the time he was able to join his crew, Dixon's fuel cell went dry, the car stalled and would not restart, forcing him off the lead lap. Dixon had been fastest in practice throughout the month.

The same fate occurred for 2016 winner Alexander Rossi of Andretti Autosport, who started in the 10th position.

Graham Rahal, of Rahal Letterman Lanigan Racing, pitted from the lead on Lap 118. He was getting efficient fuel mileage, but his crew failed to secure a rear tire and it came off the car as the car headed back onto the track. He slammed the wall, ending a shot at winning a race his father Bobby won in 1986.

The loose wheel was struck at speed by Conor Daly, causing damage to the Ed Carpenter Racing Chevrolet that had led a number of laps earlier.

“Famous last words but we had 'em,” Rahal said on the NBC broadcast of his chance to win. “We had 'em. The fuel saving that we were doing. We were in the perfect spot. We were cruising. We had them today.”

Swiss Moto3 rider Jason Dupasquier has died after a crash in Saturday's qualifying session of the Italian Grand Prix at the Mugello Circuit, MotoGP ...
Motoring
3 weeks ago

McLaren Racing CEO Zak Brown said on Friday that Juan Pablo Montoya brings more than just experience to the paddock at the Indianapolis 500 and makes ...
Motoring
3 weeks ago