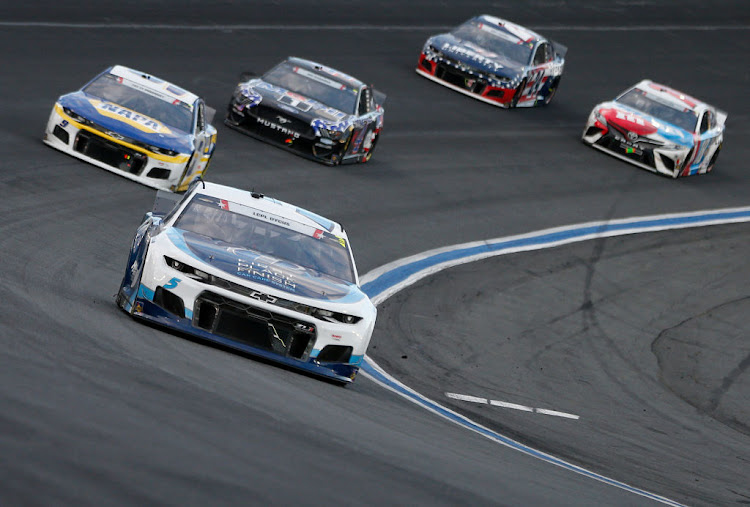 Kyle Larson put on a show in prime time on Sunday when he streaked to a dominating victory in the crown jewel Coca-Cola 600 NASCAR Cup Series race at Charlotte Motor Speedway.

"Feels good," he said after getting his first Cup win at the 1.5-mile CMS oval.

"It was not easy. I felt like I had to fight off William (Byron, his teammate) and Chase (Elliott) a lot. We had a good car there on that last run, so awesome."

The victory was the second of the season for Larson, who is in his first year with HMS after being let go by Chip Ganssi Racing last year after uttering a racial slur into a hot microphone in a televised e-race.

"It's been better than I could have ever imagined," Larson said of his debut season at Hendrick.

"For us to lead as many laps as we have this year, contend for as many wins as we have (he has finished second in three races) and now to get our second win. A crown jewel event, too. It feels great."

The three stage wins give him a series-leading nine on the season. His 327 laps led gave him 1,105 on the season, which also leads the series.

The victory gave the Hendrick team its 269th victory, breaking a tie with Richard Petty Motorsports for most in Cup history. HMS cars have won six of 15 races in 2021.

"Feels great to be the guy to help Mr  H break that record finally," Larson said.

" No 1, Richard Petty is the king of NASCAR," team-owner Rick Hendrick said.

"He's done so much for this sport. But this is so awesome. I want to thank every driver who has driven and won a race and the ones who didn't win.

"I can't really get it in my brain right now because I thought something's going to happen," he said.

The race turned into another demonstration of power for HMS. Two weeks after making Cup history by going 1-2-3-4 at Dover, the team's drivers went 1-2-4-5 on Sunday with Elliott's runner up finish and William Byron and Alex Bowman topped only by third-place Kyle Busch of Joe Gibbs Racing.

"I was happy for the boss," said Elliott, who finished second for the third time in 2021.

"Happy for Kyle and Cliff (Daniels, Larson's crew chief) and the 5 team. They've been kicking a** since February so they deserve to win.

"Proud of HMS. I feel like everybody is pulling in the same direction."

Busch was proud to prevent another Hendrick sweep.

"We had nothing for the Hendrick cars," Busch said.

Martin Truex Jnr, a three-time winner in 2021 and a two-time 600 winner, was a heavy favourite to win on Sunday. The Joe Gibbs Racing driver started P8 but began going in the wrong direction fairly quickly as he fell out of the top 10 and basically stayed there until late in the race when he blew a tyre and hit the wall. He finished 29th.

The cars of Kurt Busch and BJ McLeod dropped to the rear of the field for the start of the race because of unapproved adjustments. Busch won the race in 2010.

The Series' next race will be next weekend at the Sonoma Raceway road course in Northern California.

Swiss Moto3 rider Jason Dupasquier has died after a crash in Saturday's qualifying session of the Italian Grand Prix at the Mugello Circuit, MotoGP ...
Motoring
3 weeks ago

Valentino Rossi said on Thursday that his performances in the next few MotoGP races, starting with this weekend's Italian Grand Prix, might prove ...
Motoring
3 weeks ago