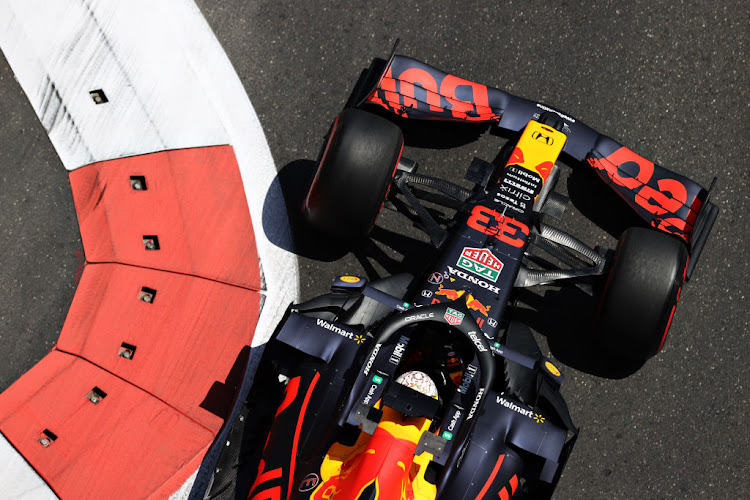 Max Verstappen on track during practice before the F1 Grand Prix of Azerbaijan at Baku City Circuit on June 4 2021 in Baku, Azerbaijan.
Image: Clive Rose/Getty Images

Red Bull's Formula One championship leader Max Verstappen set the pace in first practice for the Azerbaijan Grand Prix on Friday, with the two Ferraris close behind.

The 23-year-old Dutch driver, leading the standings for the first time in his career after winning in Monaco last month, lapped the Baku street circuit with a best time of one minute 43.184 seconds.

Both were slowed by traffic on quick laps, however, and the “dirty” track proved slippery for drivers who also had to contend with breezy conditions.

The weekend has been dominated by a row over “bendy” rear wings, with the governing FIA keeping a close eye on the situation before introducing new tests at the following French Grand Prix.

Australian Daniel Ricciardo, a winner in Azerbaijan with Red Bull in 2017, was fifth for McLaren and AlphaTauri's Pierre Gasly sixth.

The race in Baku was not held last year due to the Covid-19 pandemic and will be held without spectators this weekend.

The threat of a protest hung over the Azerbaijan Grand Prix on Friday as a row over 'bendy' rear wings dominated the conversation in the Formula One ...
Motoring
1 week ago

Tsunoda says Red Bull asked him to move to Italy

The Aston Martin Formula One team announced on Tuesday a partnership with the Racing Pride movement and said it will work through June to raise ...
Motoring
2 weeks ago