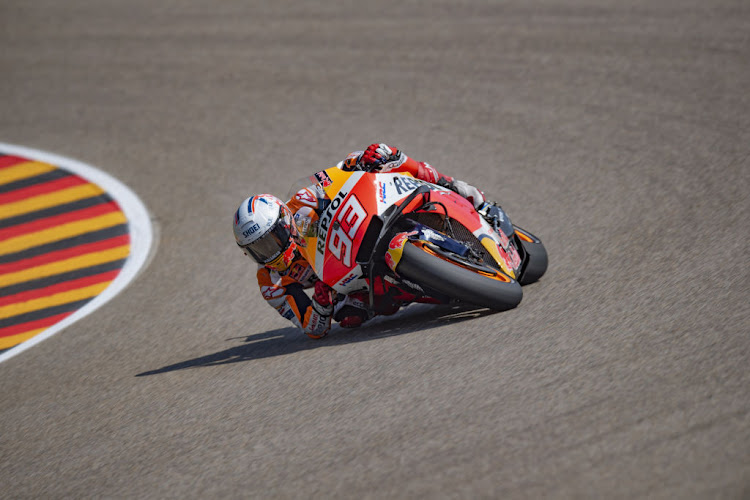 Despite being unbeaten at the Sachsenring in his previous 10 appearances, Repsol Honda rider Marquez said on Saturday he could not think about extending that run after crashing out of the previous three rounds this season.

But with the circuit's quirky layout featuring 10 left corners and only three right, Marquez appeared to suffer less with his right arm and shoulder as he quickly moved from his fifth place on the grid to take the lead on the opening lap.

While rain began to fall on the eighth lap, Marquez continued to post a string of fastest laps to move 1.5 seconds clear of Oliveira.

The Spaniard was largely untroubled as he completed his fairytale comeback victory, 581 days after he last took the chequered flag at the Valencia Grand Prix in 2019.

"I was also coming into the weekend after posting three zeroes in a row. But today I knew I had a great opportunity," Marquez said.

"When I saw the first few drops of rain, it felt like it was my race."

The victory brings a sense of relief for Marquez, who fractured his right humerus in the 2020 season-opening Spanish Grand Prix in Jerez last July.

He did not race again all year, making his comeback only at Portuguese Grand Prix in April, the third race of the 2021 season.

"It was one of the most important and hardest moments of my career," an emotional Marquez said after winning his 83rd race across all classes.

"It was really hard to concentrate in the final laps as all the memories from last year were there. But we did it."

Portuguese rider Oliveira secured his third-straight podium of the season, ahead of Yamaha's Fabio Quartararo, who moved 22 points clear in the championship race.

Pramac Ducati's pole-sitter Johann Zarco, currently second in the championship standings, faded to eighth after a poor start to the race.

KTM's Brad Binder emerged from 13th on the grid to cross the line in fourth, ahead of Ducati duo Francesco Bagnaia and Jack Miller, with Aprilia's Aleix Espargaro in seventh.

Formula One will seek to avoid a scenario where a new points-paying Saturday sprint race format being trialled this season could decide the title, ...
Motoring
7 months ago

Suzuki's Spanish MotoGP rider Alex Rins revealed on Thursday the injury that ruled him out of his home Catalan grand prix this month was caused by ...
Motoring
7 months ago