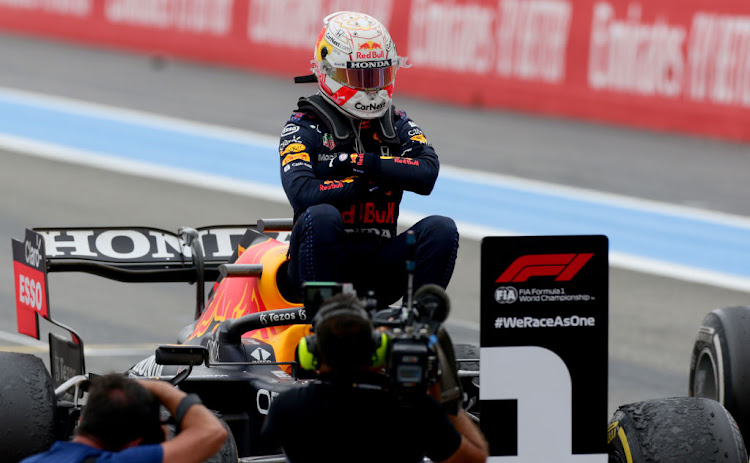 Formula One leader Max Verstappen passed Mercedes rival Lewis Hamilton on the penultimate lap to win a tense French Grand Prix for Red Bull on Sunday and canter 12 points clear at the top.

The victory from pole position at Le Castellet was the third in a row for Red Bull, picking up speed as they bid to end seven years of Mercedes domination, after wins on the streets of Monaco and Baku.

Hamilton led from the second corner as Verstappen drifted wide, caught out by a tailwind on a gusty afternoon, but the race was ultimately decided by strategy and tyre wear.

The Dutch youngster made two pitstops to Hamilton's one and the 23-year-old used his fresher tyres to hunt down his British rival and win by 2.904 seconds.

"We made the call to do the two stopper, luckily in the end it paid off. We had to work hard for it, but very rewarding," said Verstappen, who now has 13 career wins.

Mercedes had made the first move on the pitstops, with Bottas coming in and Verstappen reacting before Hamilton pitted another lap later.

Hamilton had been told it was 'hammer time', and his stop appeared quickest, but when he rejoined the track it was just behind a rival who had found what he needed.

"OK Lewis, not sure what happened there mate," his race engineer said over the radio.

Verstappen then pitted again from the lead on lap 32. Set a target of 18 seconds to make up in 19 laps, he did what was asked.

Now level with Hamilton on three wins for the season, he also took a bonus point for fastest lap and now has 131 to his rival's 119.

Red Bull pulled further ahead of champions Mercedes in the constructors' standings with a lead of 37 points.

"I had no tyres left at the end so unfortunately lost the position but still it was a good race," said Hamilton.

"Obviously they had a good strategy and it worked well for them... the only option was to stay out as long as possible and hope the tyres hold together."

The podium was the first time Verstappen and Perez, who joined Red Bull this season, had appeared together in the top three as team mates.

It was also the first time Mercedes had been beaten at Le Castellet since the southern circuit returned to the calendar in 2018.

Until this weekend Mercedes had led every practice session, and swept the front row in qualifying, with Hamilton winning from pole in 2018 and 2019.

"I'm not massively disappointed," said the champion. "Overall they've been quicker than us all weekend. It's a true reflection of the pace they have."

Bottas, fourth, made his frustration evident when he shouted over the radio "why...didn't anyone listen to me when I said it was going to be a two stopper?"

In a race of no retirements, and with Ferrari out of the points, McLaren retook third place overall with Britain's Lando Norris fifth and Australian Daniel Ricciardo sixth.

Pierre Gasly was seventh for AlphaTauri, ahead of double world champion Fernando Alonso for Alpine and Aston Martin's Sebastian Vettel.

Formula One championship leader Max Verstappen put on a blinding display in Saturday’s qualifying to seize pole position for the French Grand Prix ...
Motoring
7 months ago

Suzuki's Spanish MotoGP rider Alex Rins revealed on Thursday the injury that ruled him out of his home Catalan grand prix this month was caused by ...
Motoring
7 months ago