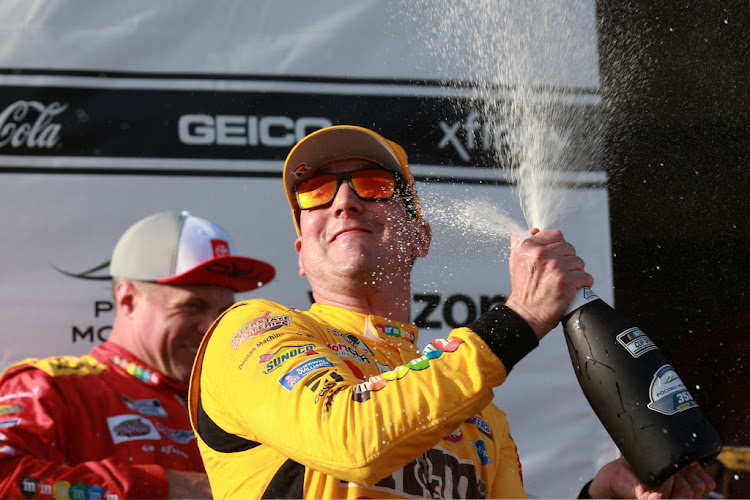 Kyle Busch took the lead with just over a lap to go and went on to win Sunday's Explore the Pocono Mountains 350 NASCAR Cup Series race at Pocono Speedway.

He got the victory thanks to saving fuel on his final stint, leaving a slew of other drivers ahead of him over the final 10 laps heading to the pits with fuel cells all but empty.

The Joe Gibbs Racing driver also got the victory in spite of having his car stuck in fourth gear for almost the entirety of the second half of the 140-lap event.

"Yep, stuck in fourth gear. About out of gas. Just saving, just riding, just playing the strategy the best we could with what was given to us," said Busch, the two-time Cup champion and now four-time winner at the 2.5-mile, three-turn Pocono track.

Busch ran out of fuel after taking the checkered flag and needed a tow truck to get his car back to pit lane.

"Sometimes these races aren't always won by the fastest car," he said.

"But I still thought we had the fastest car even though we were in the back and behind and had to come through and persevere through being stuck in fourth gear and no clutch and all that stuff, it's (clutch) all burned out."

During one pit stop, a crew member crawled through window of his Toyota, cut the shifter boot open, pounded on the gear shifter and still could not dislodge it from fourth gear. He needed a push from his crew to get rolling and out of the pits.

Busch's win was his second of the season, with his first coming at Kansas Speedway in the spring.

Kyle Larson, who lost Saturday's race at Pocono when he blew a tyre on his Hendrick Motorsports car in the final lap, finished second.

Larson's podium came despite having to start from the rear of the field because he had to switch to his backup car after his primary was badly damaged on Saturday's last-lap incident.

"Surprising finish for us," Larson said.

Especially considering his starting spot and a damaged front nose to his car suffered early in the race.

Larson's bid for a four-race winning streak ended one turn from taking the checkers on Saturday.

Larson said his car was "really loose for the majority of the race and got nose damage on one of the restarts and was off on speed after that. But Cliff (Daniels, crew chief) and everybody did a really good job of managing the race and coached me through saving fuel there at the end and was hoping that 18 (Busch) was going to run out. I saw the 11 (Denny Hamlin) running out and I was – OK, I mean, they're teammates. They got to be close to running out but I guess the 18 did pit a lap after us under caution so that probably won them the race.

"I thought we'd be outside the top 20. So, we'll take it. Happy about the effort all weekend."

Third was Brad Keselowski of Team Penske, who led with nine laps to go but was forced to pit for fuel.

"We ran a really good race but just didn't have enough fuel to make it to the end like those others guys did," Keselowski said.

"They beat us on power and fuel mileage. We have a lot of work to do to keep up with those guys. I am really proud of Jeremy Bullins and the team. They had the setup really well and it put is in position and we ran a great race today and maximised our day."

"It was a nice rebound from where we have been. We have had a lot of bad breaks with things breaking and all kinds of issues across the board."

Kevin Harvick, about the only contender who wasn't in fuel trouble late in the race, finished fourth in his Stewart-Haas Racing Ford.

Bubba Wallace was fifth, giving him his best finish of the season.

Sunday's race was the second half of a weekend doubleheader at Pocono. Alex Bowman of Hendrick Motorsports won Saturday's first race when Larson, looking to win his fourth straight Cup event, blew a tyre on the final lap. He had a healthy lead when the tyre gave out.

Busch, who led the most laps (30) and finished second on Saturday, appeared to have a car good enough to win Race 2 as he led 28 laps early. But as he headed to the pits from the lead on lap 73, his car became stuck in fourth gear. Even though he needed his pit crew to push him to get rolling, he stayed in contention.

In addition to Larson, Ryan Newman, Corey LaJoie, Ryan Preece, Anthony Alfredo, Cole Custer and Ross Chastain each went to backup cars and started from the rear for Sunday's race after damaging their cars on Saturday.

Justin Allgaier made his first Cup start of the season after Justin Haley crashed hard in the Xfinity Series event held earlier in the day. Allgaier took Haley's place in the No 77 Spire Motorsports Cup Chevrolet and finished 25th.

Next up for the series is the debut road race at Road America in Elkhart Lake, Wisconsin.

Red Bull's Max Verstappen won the Styrian Grand Prix by a massive margin on Sunday to power 18 points clear of Lewis Hamilton in the Formula One ...
Motoring
10 months ago

World championship leader Fabio Quartararo cruised to his fourth win of the season at the Dutch Grand Prix on Sunday, leading a Yamaha one-two ahead ...
Motoring
10 months ago

Lewis Hamilton needs a quicker car to take the fight to Formula One leaders Red Bull but the seven times world champion's Mercedes team made it clear ...
Motoring
10 months ago