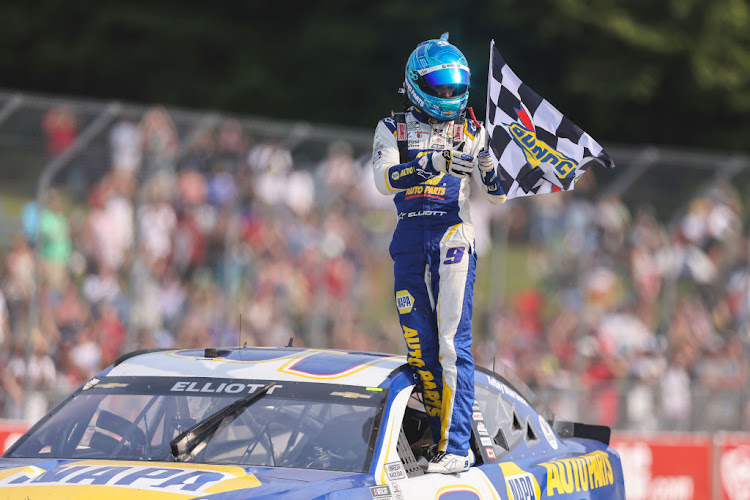 A lousy starting position proved to be no problem for Chase Elliott as the road-racing ace deftly worked his way up through the field, took the lead for the first time on Lap 38 and drove to victory in Sunday's Jockey Made in America 250 at Road America in Elkhart Lake, Wisconsin.

The victory at the Road America road circuit – which hosted its first Cup event since 1956 – was the Hendrick Motorsports star's seventh in a Cup car and his sixth in his last eight starts.

Elliott led a race-best 24 laps. His margin of victory was 5.7 seconds.

"I'm really proud of our team for overcoming some adversity early and having to start in the back."

The victory helped put to rest memories of finishing 12th and 27th a week ago in the doubleheader in Pocono.

"We've had a rough two weeks so it feels really good.

The victory was his second of the season – his other coming at Circuit of the Americas, which, like Road America, is a natural terrain road course.

"This track has a lot of character to it and it's so long you have a lot of opportunity to make mistakes, or be good whenever you hit it," Elliott said.

"Four miles is a long course. It has a lot of bumps, a lot of sections that are really tricky to get through and conserving your tyres was a little bit of a thing today."

"It was a lot of fun," said Bell, who won February's race at the Daytona infield road course.

"It's been a trying last two months but we feel we're getting back on track here. There's no reason we can't be running up front every week."

Kyle Busch, who started from the rear of the field because he was forced into his backup for the start, finished third in his Joe Gibbs Toyota.

Elliott, who was very average in practice Saturday, started 34th after he was unable to complete a lap as cautions came out during the two times he was attempting his full speed lap.

"Never felt like I got in a real good rhythm all of yesterday," he said.

"For whatever reason there after halfway through the race, I started finding some of that rhythm and was able to put it together and pieced different parts of the track and then finally I felt like I was able to piece most of it together. Stayed with it and glad it worked out."

It may have cost Austin Cindric a chance at victory. Cindric, who drives full-time in the Xfinity Series and part-time in Cup for Team Penske, was leading late in the second stage when his Ford Mustang broke a drive train component, ending his day.

"I only had one-wheel drive and when you only have two other ones spinning with 750 horsepower it is a bit challenging," Cindric said.

"It was quite dramatic taking the lead and then immediately losing everything. Not a weekend I am necessarily happy about."

The Series heads next to the 1.5-mile Atlanta Motor Speedway oval.

Seven-time world champion Lewis Hamilton will be staying in Formula One for the next two years at least after he and Mercedes announced a contract ...
Motoring
3 weeks ago

Michael Schumacher was Sebastian Vettel's boyhood hero, and the younger German is providing guidance and a point of reference for the Formula One ...
Motoring
3 weeks ago