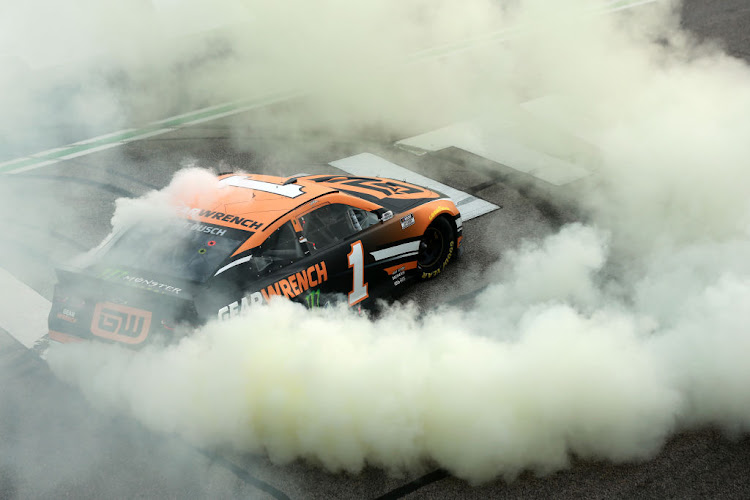 Veteran Kurt Busch, perhaps driving for his job or even his career, got just what he needed on Sunday as he won the Quaker State 400 at Atlanta Motor Speedway.

The victory, which was his first since Race No 30 of 2020 and just his third in the last three seasons, gives him a berth in the 16-driver, 10-race playoffs that begin five races from now at Darlington Raceway.

His relief at earning a playoff berth was evident after exiting his No 1 Chevrolet Camaro.

“This was one of those years,” the 42-year-old Busch said, “where I knew we were going to have our backs against the wall trying to get above the cutoff line (for the playoffs) and race hard and race smart.”

The worries are over for now.

Busch, the 2004 Cup champion, led a race-best 144 laps. It was his fourth career win at the 2.4km Atlanta oval and came by 1.2 seconds over his runner-up brother Kyle Busch, with whom he battled like crazy over the final laps.

“Hell yeah, we beat Kyle,” Busch said, playing to the cheers of the fans afterward. “I taught that kid everything he knows. He should be grateful.”

Fourth was Alex Bowman of Hendrick Motorsports while Team Penske's Ryan Blaney, who won at Atlanta in March, was fifth.

To get the win, Kurt Busch had to track down his younger brother, who had taken the lead from Kurt during green flag pit cycling with about 50 laps to go. With 24 to go, Kyle got caught in lapped traffic, Kurt made the pass for the lead and, from there, held on for the win.

“We just don't have enough front end with laps on tires,” Kyle Busch said. “I had everything I had there early and then just smoked it behind the 42 (Chastain in the lapped Ganassi car) obviously. Shows you what kind of driver he is, and just tried to fight hard after that when I got passed.

“Had one valiant effort off of (Turn) 2 but just didn't have enough momentum to track him down and make him go high in 3 and 4 and after that, the tires were smoked.”

Kurt Busch's team owner, Chip Ganassi, said recently that he is selling the Chip Ganassi Racing NASCAR operation after the season. The new owners have said that Daniel Suarez will occupy one of their two cars next year. That means jobs are on the line for both Busch and Chastain.

“It's wonderful,” Kurt said of getting a well-timed win. “For all of Ganassi. Trackhouse bought our team, I don't know where I'm going but I just love racing cars and I want to race that next-gen car (which will be introduced in 2022). That's why I'm trying to stick around.”

Georgia native Chase Elliott, the defending series champ and a winner a week ago at the Road America road circuit, started from the pole and led the first 13 laps. But troubles in the pits – including one incident in which his car hit a pit crew member for Cole Custer – knocked him back to the middle of the field.

Elliott climbed back and would finish seventh.

Truex was sent to the rear of the field for the start of the race after failing pre-race inspection twice. But around Lap 50 of 260, the Joe Gibbs Racing driver entered the top 10. His hopes took another hit, however, when he and Kevin Harvick ran into each other in the pits between stages 1 and 2. But both Truex (a three-time winner this year) and Harvick (zero wins in 2021) made it back into the top 10 by the end of the second stage.

Kyle Larson of Hendrick Motorsports, a heavy favourite to win at AMS, had his chances of winning a fifth 2021 race hindered when he was slapped with a speeding penalty in the final stage. He finished 18th.

As the cars were circling under yellow before the start of the third stage, officials threw the red flag. The problem was pot holes on the front stretch – the track's 24-year-old asphalt was coming up. The pot holes were filled and race went back to yellow after a 19-minute stoppage.

Last week, AMS owners said they would repave and reconfigure the track in the off season. That news angered drivers who enjoy racing on the old surface and configuration.

The winner said he would miss the old Atlanta – potholes and all.

“What a genuine, awesome, old-school racetrack and I just asked the track today, ‘Last time here on your old asphalt, can I have an old guy win?'" Busch said. “And she answered.”

The series heads north to New Hampshire Motor Speedway in Loudon next weekend.

Formula E is headed for SA

Cape Town, Vancouver and Seoul have been added to the new season of Formula E, the all-electric racing series that will grow to a record 16-race ...
Motoring
10 months ago

Peugeot Sport on Tuesday pulled the covers off its radical new 9X8: a sleek and futuristic racing car that will take the fight to Ferrari, Porsche, ...
Motoring
10 months ago

Red Bull boss Christian Horner fears that by penalising drivers for what might be seen as racing incidents, Formula One risks the equivalent of a ...
Motoring
10 months ago