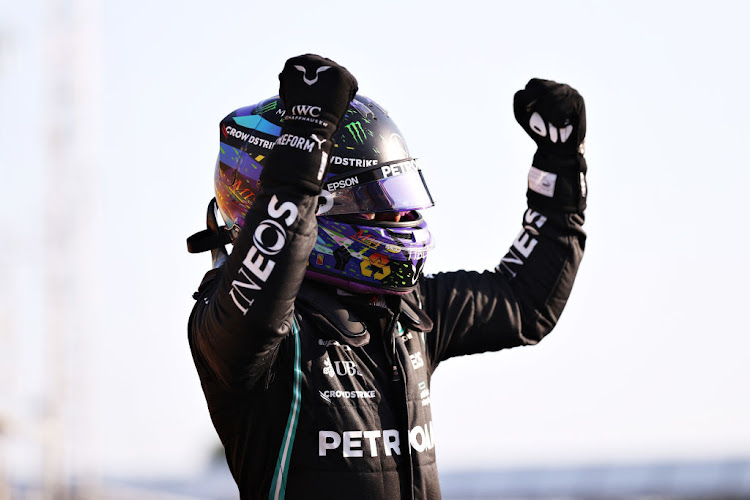 Fastest qualifier Lewis Hamilton celebrates in parc ferme during qualifying ahead of the F1 Grand Prix of Great Britain at Silverstone on July 16, 2021 in Northampton, England.
Image: Lars Baron/Getty Images

Seven-time world champion Lewis Hamilton will start Formula One's first Saturday sprint from the front of the grid after lapping fastest in a Friday qualifying session at his home British Grand Prix.

The winner of Saturday's 17-lap dash around the Silverstone circuit will take the official pole position for Sunday's main event in front of a sell-out crowd expected to number more than 140,000.

Hamilton, who can count on the support of a fervent crowd that rose to salute the Mercedes driver as he went top, will be joined on the front row by Red Bull's championship leader Max Verstappen.

Verstappen leads Hamilton by 32 points after nine races but the Briton has won his home grand prix a record seven times already and cannot be counted out.

Hamilton's team mate Valtteri Bottas, who played a team role in helping punch a hole in the air to give the Briton a slipstream, qualified third with Ferrari's Charles Leclerc fourth.

The new format is being trialled at Silverstone and two other circuits that have yet to be decided to provide more excitement over the three days.

If deemed a success, it will be expanded to more rounds next season.

The feel good story of the session was Britain's George Russell, who drew a huge cheer from his home crowd when he qualified his struggling Williams a hugely impressive eighth for Saturday's grid.

Formula One champions Nico Rosberg and Sebastian Vettel have criticised the decision to award pole position at the British Grand Prix to the winner ...
Motoring
6 months ago

McLaren Formula One driver Lando Norris said he struggled to sleep after being mugged at the European soccer championship final last weekend but ...
Motoring
6 months ago