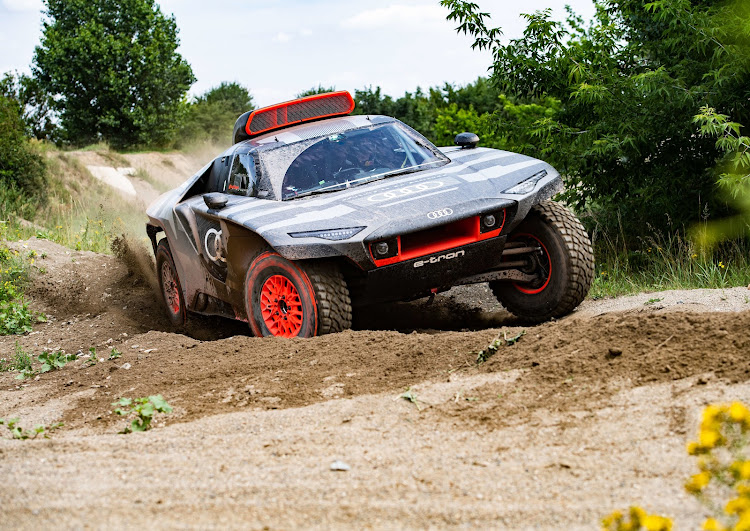 Audi has unveiled its all-new Dakar Rally challenger. Set to challenge the rest of the field for overall honours in 2022, the RS Q e-tron will tackle the world's most famous off-road race with an electrified powertrain that's sure to set a few cats among the pigeons.

Indeed, peel away that aggressive bodywork and you'll discover that the front and rear axles are both fitted with a motor-generator unit (MGU) borrowed from the current Audi e-tron FE07 Formula E car, which has been developed by Audi Sport for the 2021 season. Only minor modifications had to be made to use the MGU in the Dakar Rally.

A third MGU, of identical design, is part of the energy converter and serves to recharge the high-voltage battery while driving. In addition, energy is recuperated during braking. The battery weighs about 370kg and apparently has a capacity of around 50kWh.

Now if you're at all familiar with electric cars then you'll know that 50kWh isn't much. Especially not when installed inside a high-performance off-road racing car that has to travel hundreds of kilometres in a day through remote areas void of any charging spots.

To get around this rather glaring issue, Audi has gone and fitted the RS Q e-tron with a bespoke generator — a highly efficient 2.0-litre TFSI engine that has its roots in the DTM series. Paired to the third MGU, it ensures a constant and reliable source of electricity.

“The quattro was a game-changer for the World Rally Championship,” says Julius Seebach, MD of Audi Sport. “Audi was the first brand to win the Le Mans 24 Hours with an electrified drivetrain. Now, we want to usher in a new era at the Dakar Rally, while testing and further developing our e-tron technology under extreme conditions.” 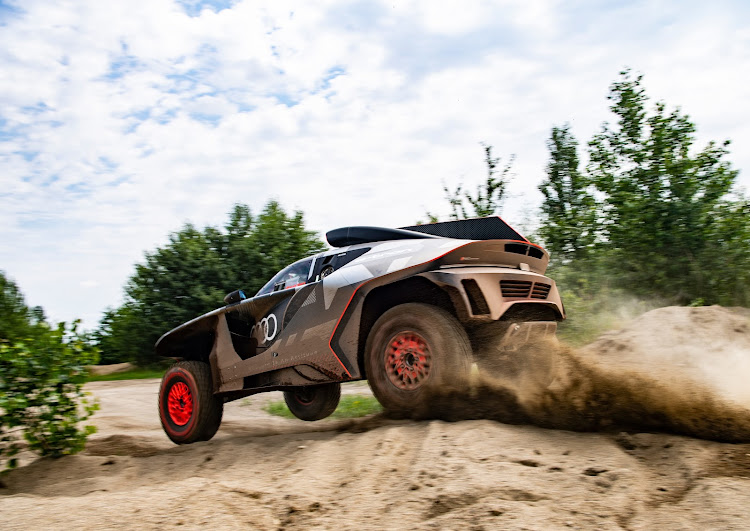 A 2.0-litre four-cylinder TFSI engine has been installed to keep the battery charged.
Image: Supplied

According to Audi, the maximum system power of the e-drivetrain is 500kW. However how much of this may actually be used during the Dakar Rally is still being finalised by the event's organisers. The electric motors can be controlled extremely precisely and can thus ensure good drivability. In addition, kinetic energy can also be harvested during braking.

It's also interesting to note that the RS Q e-tron only needs one forward gear, while the front and rear axles are not mechanically connected. Software developed by Audi takes over the torque distribution between the axles and creates a virtual, freely configurable centre differential. This technology also has the additional benefit of saving weight and  space that would have been taken up by prop-shafts and a mechanical differential.

This cutting-edge Dakar Rally entry is being run in conjunction with Q Motorsport.

“Audi has always chosen new and bold paths in racing, but I think this is one of the most complex cars that I have ever seen,” says team principal Sven Quandt.

“The electric drivetrain means that a lot of different systems have to communicate with each other. Besides reliability, which is paramount in the Dakar Rally, that’s our biggest challenge in the coming months.”

The prototype of the Audi RS Q e-tron had its first rollout in Neuburg at the beginning of July. An intensive test programme and the first test entries at cross-country rallies are on the agenda from now until the end of the year.

Sam Bird is on top of the world as he heads into two home Formula E races in London this weekend, and he intends to stay there
Motoring
1 year ago

The Italian Grand Prix at Monza in September will feature Formula One's second sprint race after the experimental format made its debut at ...
Motoring
1 year ago

Jaguar confirmed its long-term future in the all-electric Formula E series on Thursday, with the new Gen3 era set to start next year.
Motoring
1 year ago