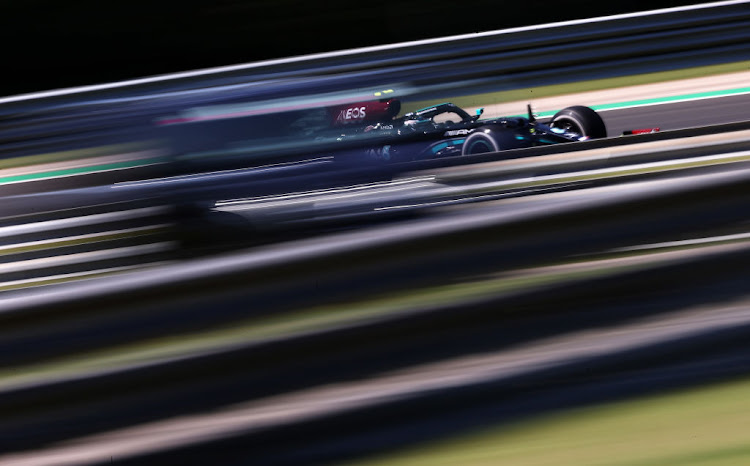 Valtteri Bottas during practice ahead of the F1 Grand Prix of Hungary at Hungaroring on July 30, 2021 in Budapest, Hungary.
Image: Lars Baron/Getty Images

Valtteri Bottas knocked Formula One championship leader Max Verstappen off the top of the time sheets to set the pace ahead of Mercedes team mate Lewis Hamilton on the opening day of practice at the Hungarian Grand Prix.

Verstappen was 0.298 seconds off the pace in third.

The Dutchman, who leads Hamilton by eight points in the overall standings, had led the first of Friday's two sessions ahead of Bottas and Hamilton.

But the 23-year-old appeared to struggle with the balance of his Red Bull in the hotter afternoon session, with track temperatures soaring to nearly 60°C.

Esteban Ocon was fourth in the afternoon session for Alpine ahead of Verstappen's team mate Sergio Perez.

Pierre Gasly in the AlphaTauri was sixth.

Fernando Alonso, who celebrated his 40th birthday on Thursday ended the day seventh for Alpine at the track where he scored his first Formula One win in 2003.

Sebastian Vettel was eighth for Aston Martin ahead of McLaren's Lando Norris.

His team mate Lance Stroll rounded out the top 10.

Yuki Tsunoda completed just three laps in his AlphaTauri in the afternoon. The Japanese rookie had spun into the barriers in the opening session, bringing out a brief red flag, with his mechanics spending much of the second hour of running carrying out repairs.

Hamilton and Verstappen head into the weekend with tensions between them simmering after a controversial collision at the last race in Britain.

They could leave Sunday's race level on points if the Briton, gunning for a landmark 100th victory and record ninth in Hungary, wins ahead of his Red Bull rival with the fastest lap.