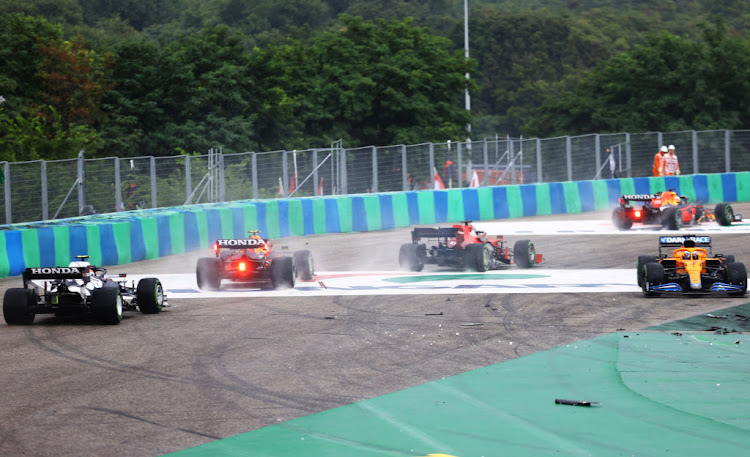 A general view of the crash at the start during the F1 Grand Prix of Hungary at Hungaroring on August 01, 2021 in Budapest, Hungary.
Image: Bryn Lennon/Getty Images

The Hungarian Grand Prix was halted on Sunday after opening lap collisions, including Red Bull's Formula One leader Max Verstappen, left debris on a wet and slippery track.

Bottas made a sluggish start and was passed by Lando Norris and Verstappen, but the Finn then braked way too late into the corner and went into the back of Norris's McLaren, which collided with Verstappen.

"I'm sorry guys," Bottas, who also collided with Perez, said over the radio.

Verstappen continued, dropping from third to 13th with a heavily damaged car while Mercedes rival Lewis Hamilton led away cleanly from pole position.

Leclerc was taken out by Stroll running into him.

McLaren then decided to retire Norris after the red flags came out, leaving 15 cars in the race.

Seven-times world champion Lewis Hamilton turned up the heat at an already sweltering Hungaroring on Saturday, delivering a scorching lap to seize ...
Motoring
11 months ago

Mercedes team boss Toto Wolff said Red Bull's criticism of seven-time champion Lewis Hamilton in the aftermath of his collision with Formula One ...
Motoring
11 months ago

Netflix will air a documentary series on Formula One great Michael Schumacher from September 15, the online streaming platform said on Friday.
Motoring
11 months ago