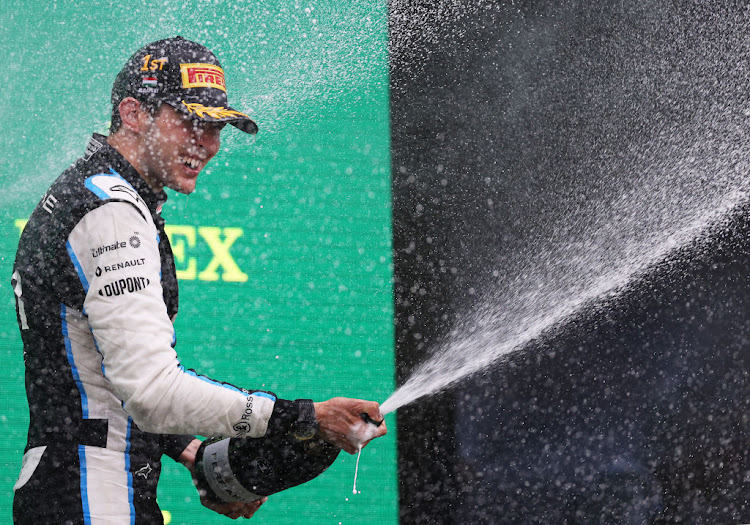 Race winner Esteban Ocon celebrates on the podium during the F1 Grand Prix of Hungary at Hungaroring on August 01, 2021 in Budapest, Hungary.
Image: Lars Baron/Getty Images

Frenchman Esteban Ocon fended off Sebastian Vettel to take a maiden Formula One win for Alpine in a chaotic Hungarian Grand Prix, that saw Lewis Hamilton charging through from last-to-third to retake the championship lead from tenth-placed Max Verstappen.

The 24-year-old Ocon crossed the line 1.8 seconds clear of his Aston Martin rival, while Hamilton nearly caught the pair up but fell 2.7 seconds short.

Still, the Briton put himself six points clear of Verstappen, who scored just the sole point after being caught up in an opening lap incident.

The Dutchman, who had made a good start on a wet track from second on the grid, was right behind Hamilton heading into the first corner when he was collected by McLaren’s Lando Norris. The Briton was himself tagged by the slow starting Mercedes of Valtteri Bottas that sent him sliding into the Red Bull.

The ensuing red-flag stoppage gave Verstappen's mechanics a chance to carry out some repairs but the Red Bull was too hamstrung by the damage to bring him back into contention.

The opening lap incident appeared to have handed the race to Hamilton, who kept his nose clean to stay in the lead.

But a strategic misstep that left him out to take the restart on intermediate tyres on a drying lap, even as every other car peeled into the pits, dropped him to the back when he pitted for dry tyres a lap later.

The win was the first of Ocon’s career and first for his Enstone-based team in its Alpine guise. It was also the first for a French driver in a French car since Alain Prost mounted the top step of the podium for Renault in 1983.

It was made even sweeter by a fourth-place finish for Fernando Alonso, who scored his maiden win for the same team in Hungary in 2003 when it raced as Renault.

The Spaniard, who celebrated his 40th birthday on Thursday and whose defence against Hamilton played a part in securing the win for Ocon, was voted Driver of the Day.

The Hungarian Grand Prix was halted on Sunday after opening lap collisions, including Red Bull's Formula One leader Max Verstappen, left debris on a ...
Motoring
9 months ago

Seven-times world champion Lewis Hamilton turned up the heat at an already sweltering Hungaroring on Saturday, delivering a scorching lap to seize ...
Motoring
9 months ago

Mercedes team boss Toto Wolff said Red Bull's criticism of seven-time champion Lewis Hamilton in the aftermath of his collision with Formula One ...
Motoring
9 months ago