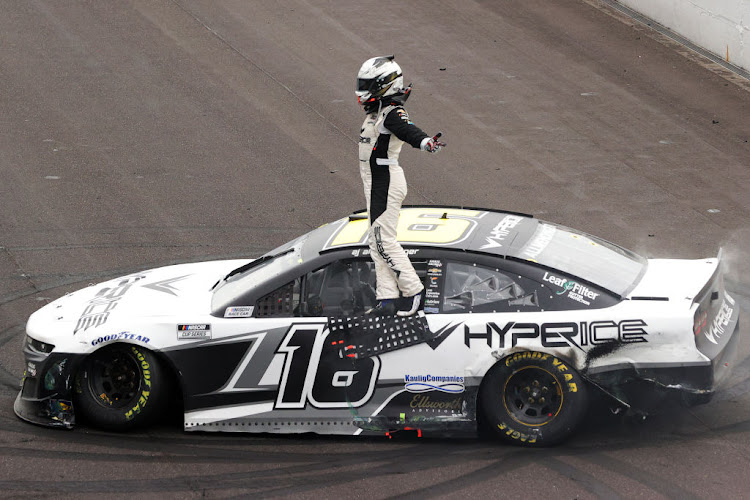 The road course specialist led only two laps – the last two – in his Kaulig Racing Chevrolet to snag the double overtime victory.

"This is unbelievable," Allmendinger said.

"In my wildest dreams I could never imagine how that played out."

Allmendinger was starting his fourth Cup race of the season, all coming on road courses. The win was his second in 375 series starts.

Third was Hendrick Motorsports' Kyle Larson, who was looking to win back-to-back races.

Rounding out the top five was Chase Elliott, a heavy favourite at the start of the day, and Matt DiBenedetto of the Wood Brothers Racing team.

Allmendinger took the lead on the final restart lap when Chase Briscoe and Denny Hamlin were taken out of the running.

First, Briscoe was penalised after he blew through the grass on turn 1 and illegally re-entered the track while attempting to take the lead from Denny Hamlin.

Joe Gibbs Racing's Hamlin kept the lead but was bumped sideways by Briscoe several corners after Briscoe had cut through the grass.

Allmendinger was there to capitalise when Hamlin was turned.

"It was survival of the fittest," Allmendinger said of the finish.

"We probably had an eighth or 10th place car. I thought we were going to finish 12th or 15th. And then those restarts were insane."

Hamlin, who was attempting to win for the first time in 2021, and Briscoe engaged in a lengthy discussion after the race.

Briscoe said he wasn't aware he had been penalised until he got to turn 10. Hamlin scoffed at that.

"I agree it's not on purpose," Hamlin said of the punt from behind.

"My team told me he had a penalty right away. To me, it's obvious that if you cut the race track and end up in the lead you are going to have a penalty."

Hamlin called it bad judgment and a lack of situational awareness from Briscoe and said  someone "can't race that way."

"It sucks. It obviously turned our day upside down," Hamlin said.

"I would have been upset too," Briscoe said.

"Denny's been in that situation. Trying to go for your first win. I felt like that was my best opportunity to win the race if I could get under him there."

Sunday was the debut of Cup cars on the road circuit in Indianapolis.

Late in the race, curbing began coming apart and that caused several very serious wrecks. Those wrecks not only forced a double overtime finish but brought out long red and yellow flags and took out a number of cars that appeared to have shots at victory.

Among those taken out were Martin Truex Jnr, Joey Logano, William Byron and Tyler Reddick.

Larson appeared to headed for a second straight victory as he won the road race last weekend at Watkins Glen International. He had a big lead with 10 laps to go. But then came the wrecks. He led a race best 28 laps.

Elliott, who has won seven times on the roads since the 2017 season, led 14 laps on Sunday.

Dutch driver Nyck de Vries won the Formula E world championship as rivals crashed out of the season's final race in Berlin on Sunday, with Mercedes ...
Motoring
3 months ago

South African Brad Binder delivered a sensational home Austrian Grand Prix win for his KTM team on Sunday after a late, crazy gamble to stick to ...
Motoring
3 months ago

Lewis Hamilton's eight-point lead in the Formula One championship was confirmed on Thursday as Aston Martin dropped an appeal against Sebastian ...
Motoring
3 months ago