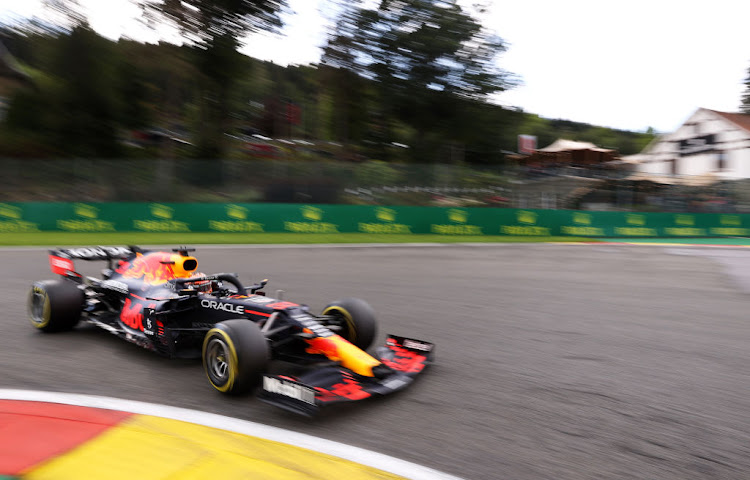 Max Verstappen on track during practice ahead of the F1 Grand Prix of Belgium at Circuit de Spa-Francorchamps on August 27, 2021 in Spa, Belgium.
Image: Lars Baron/Getty Images

Max Verstappen put Red Bull at the top of the Formula One time sheets before spinning out of Friday's practice for the Belgian Grand Prix.

The Dutchman, looking to revive his title challenge after seeing a 33-point lead turn into an eight-point deficit behind Mercedes rival Lewis Hamilton in the last two races, spun into the barriers with two minutes left on the clock in an incident that brought out the red flags and put an end to the session.

The 23-year-old Verstappen, however, had already lapped the seven-km Spa-Francorchamps circuit in 1:44.472 seconds which stood as the fastest time of the day.

Finn Valtteri Bottas, who beat the Red Bull driver to the fastest time during the opening hour of practice, was second for Mercedes. Hamilton, who is gunning for a landmark 100th win this weekend but ended the first session 18th, recovered to third.

The top three were separated by just 0.072 seconds.

Verstappen lost control of his Red Bull as he turned into the right-handed Malmedy corner before nudging backwards into the barriers.

There did not appear to be too much damage but replays showed the Dutchman trying to tear off sponsor hoardings that had become tangled up with his car's rear wing.

Moments earlier Ferrari's Charles Leclerc had forced a brief halt to the session when he crashed into the barriers close to the scene of Verstappen's incident.

Teams were focused on high-fuel race simulation runs when Verstappen went off and the fastest times had already been set.

Lance Stroll was sixth for Aston Martin with Esteban Ocon, winner of the last race in Hungary, seventh.

Sebastian Vettel, who was disqualified from a second-place finish in Hungary, was eighth in the other Aston Martin.

Lando Norris was ninth for McLaren while Mexican Sergio Perez, who Red Bull announced on Friday will be staying next year, rounded out the top 10.

Mick Schumacher followed in his seven-time champion father Michael Schumacher's footsteps by making his Formula One appearance at the Spa circuit 30 years on from the German great's F1 debut at the same venue.

The Haas driver, sporting the same helmet design worn by his dad on that weekend, was 20th.

The Belgian Grand Prix is the first of a 'triple-header' of three races on successive weekends.

Mexican Sergio Perez will race on with Red Bull next year alongside Max Verstappen, the Formula One team said in a statement on Friday
Motoring
3 weeks ago

Seven-times Formula One world champion Lewis Hamilton said both he and his Mercedes team would be in better shape for the second half of the season, ...
Motoring
3 weeks ago