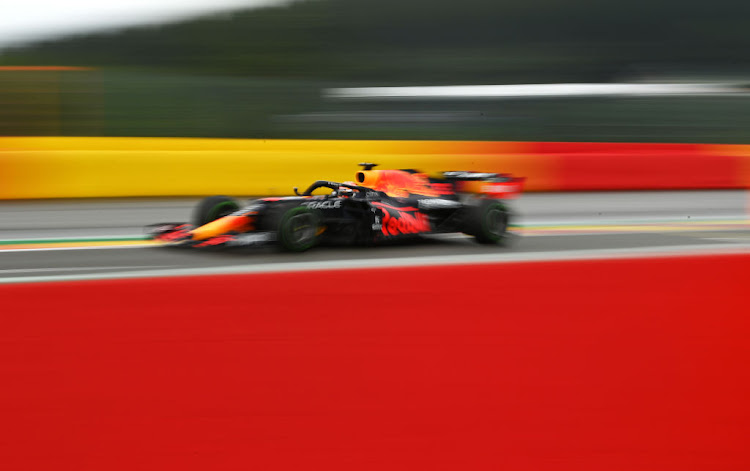 Max Verstappen during final practice ahead of the F1 Grand Prix of Belgium at Circuit de Spa-Francorchamps on August 28, 2021 in Spa, Belgium.
Image: Dan Mullan/Getty Images

The Dutchman, who also set the pace in Friday's practice before spinning out into the barriers, lapped the undulating, seven-km Spa-Francorchamps track in 1:56.924 seconds, nearly a second quicker than Mexican Perez.

Verstappen came into the weekend determined to revive his title challenge with a maiden win at Spa after seeing his 33-point lead over Hamilton turn into an eight-point deficit in two races.

Briton Hamilton, a four-time winner around the forested track, is gunning for a landmark 100th win in Sunday's race.

After an overcast but largely dry day on Friday, Spa's capricious weather delivered the threatened rain on Saturday.

Drivers used intermediate tyres on the damp track with several taking to the run-off areas as they got to grips with the slippery conditions.

The track appeared to be drying as the session progressed but the rain returned with a little under half-an-hour to go before relenting at the end.

More rain ahead of qualifying could turn the battle for pole position into a lottery later on Saturday.

Frenchman Esteban Ocon, who raced to his maiden Formula One win at the last race in Hungary, was fifth for Alpine.

Lance Stroll, carrying a five-place grid penalty for colliding with Charles Leclerc at the start of the race in Hungary, was sixth for Aston Martin ahead of AlphaTauri's Pierre Gasly.

Sebastian Vettel, a three-time winner at Spa, was eighth in the other Aston Martin ahead of the Williams of Briton George Russell and Fernando Alonso who rounded out the top 10 for Alpine.

Valtteri Bottas, celebrating his 32nd birthday, was only 11th in the other Mercedes. The Finn is also carrying a five-place grid penalty for triggering a start-line crash in Hungary.

Leclerc, running a new chassis after crashing on Friday, was 16th for Ferrari.

Kimi Raikkonen pitted early in the session with a brake failure on his Alfa Romeo.

Dutch driver Beitske Visser and Norwegian Ayla Agren were discharged from hospital after a six-car pile-up in qualifying for the all-female W Series ...
Motoring
4 months ago

Mexican Sergio Perez will race on with Red Bull next year alongside Max Verstappen, the Formula One team said in a statement on Friday
Motoring
5 months ago