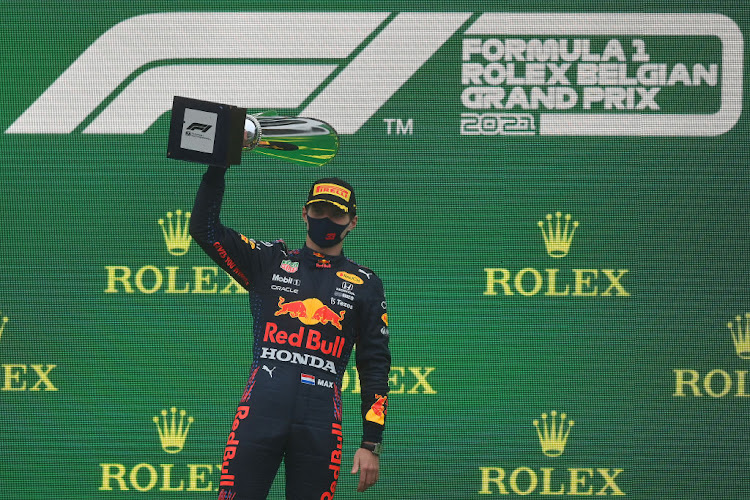 Red Bull's Max Verstappen won Formula One's shortest race on Sunday with the rain-hit Belgian Grand Prix red-flagged after three laps behind the safety car and half-points awarded for only the sixth time ever.

Fans waited for three hours in torrential rain at the Spa-Francorchamps circuit before the safety car led the field from the pitlane.

The race was then stopped after completing the laps necessary for half points to be scored.

George Russell, who put his Williams on the front row with a stunning lap in a wet qualifying session on Saturday, finished second to secure his first Formula One podium.

Seven-times world champion Lewis Hamilton was third for Mercedes and the Briton's overall lead over Verstappen was cut from eight points to three.

"It's a big shame to not do proper laps but the conditions were very tricky out there," said Verstappen after sealing what will count as his 16th career win and sixth this season.

The rain never really relented with conditions deteriorating even before the start.

Red Bull's Sergio Perez crashed out on the way to the grid and appeared to be out of the race but stewards allowed the Mexican driver to start from the pitlane after his team used the prolonged rain delay to complete repairs.

Their work was in vain as he was classified last.

Daniel Ricciardo was fourth for McLaren ahead of Sebastian Vettel in his Aston Martin with Pierre Gasly sixth for AlphaTauri and fellow-Frenchman Esteban Ocon seventh for Renault-owned Alpine.

Charles Leclerc was eighth for Ferrari with Nicholas Latifi ninth for Williams and Spaniard Carlos Sainz taking a half point in 10th for Ferrari.

The governing FIA's race provisional race classification gave the positions after lap one, explaining that this was in accordance with the sporting regulations.

"For the determination of points, Article 6.5 is applicable, the leader having crossed the Control Line three times, therefore complying with the requirement for the leader to have completed more than two laps in order for half points to be awarded," it said.

Hamilton's Mercedes team mate Valtteri Bottas, who started 13th in his Mercedes after a five-place grid drop, moved up a place after Perez’s crash. He finished out of the points in 12th.

The start of the Belgian Formula One Grand Prix was suspended after torrential rain drenched the Spa-Francorchamps circuit on Sunday and two hours ...
Motoring
2 weeks ago

Perez crashes out of Belgian GP before the start

Red Bull suffered another blow to their Formula One constructors' championship challenge when Mexican Sergio Perez crashed out of the Belgian Grand ...
Motoring
2 weeks ago

Verstappen on pole in Belgium, Russell a sensational second