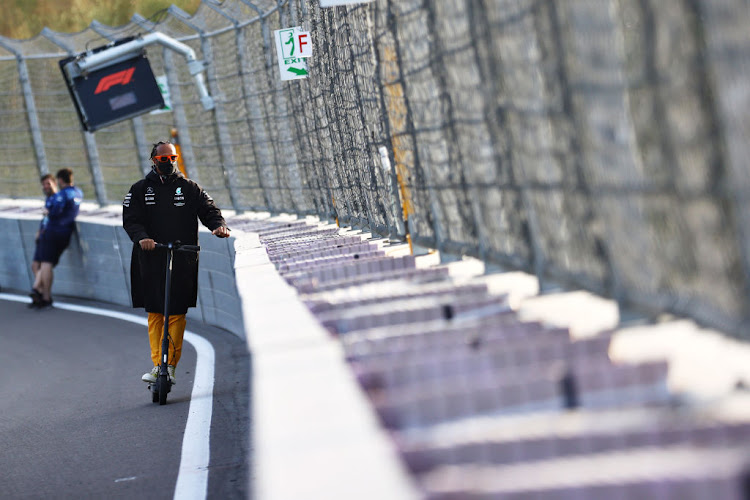 Lewis Hamilton rides a lap of the track on his scooter on September 2 2021ahead of the F1 Grand Prix of The Netherlands at Circuit Zandvoort.
Image: Bryn Lennon/Getty Images

Lewis Hamilton is braced for a barrage of boos from Max Verstappen's Orange Army at the first Dutch Grand Prix in 36 years but the seven-times world champion hopes to turn it to his advantage.

Some 70,000 fans will be at Zandvoort every day this weekend and Hamilton, three points clear of his Dutch Red Bull rival in the standings, can expect a hostile reception.

Hamilton, who arrived at the seaside circuit somewhat provocatively on Thursday wearing an entirely orange outfit and told reporters that the colour suited him, said it was to be expected.

“I've never been someone that would go to an event and boo but you understand it,” said the Mercedes driver when asked about some other races where Verstappen fans have been present in numbers.

“You see it at football events. It's just the passion that the fans have, or the dislike that some of them have for their opponents. I respect it ... I know I do have some Team LH fans in the Netherlands, there will probably be a small portion in the grandstands out there and I admire them for being able to withstand the boos too.”

Hamilton, who maintained British F1 fans did not boo, said he would aim to turn the negative energy into a positive “and try to put it into the driving”.

Verstappen has won six of the 12 races so far to Hamilton's four but has suffered from incidents, including a first-lap collision between the pair at Hamilton's home race in July — won by the Briton.

The two have shown plenty of respect for each other on and off track, while racing hard, and Verstappen said that while he could not condone the booing he could do nothing to stop it either.

“When you go to a football match, you come into a home ground and the opposition will be booed at some point and it’s not up to the local club to go on to the speakers and say ‘guys you cannot boo’ because it will naturally happen,” he told reporters.

“I don’t think it’s up to me to say guys you cannot boo because I am not them and I have to just focus on what I’m doing on the track.

“I’m pretty sure most of them are here for a great weekend to see cars racing and of course some of them will boo but I cannot decide for them. You can say 'you cannot boo' but do you really think they are going to listen to me?”

'I had fun and I did it my way,' says Kimi Raikkonen of his F1 career

Kimi Raikkonen said on Thursday Formula One had never been the most important thing in his life and he would walk away with no regrets, no complaints ...
Motoring
3 weeks ago

Formula One returns to the Netherlands after 36 years this weekend, thrilling Max Verstappen fans who hope to see their local hero claim victory, but ...
Motoring
3 weeks ago