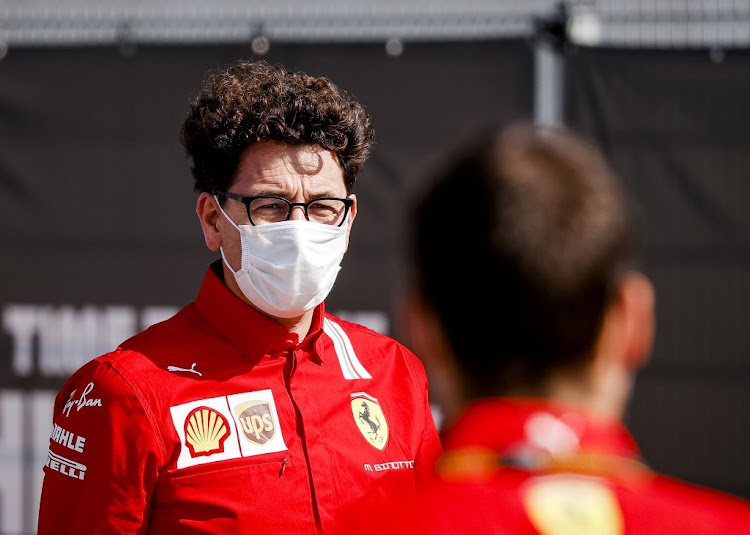 Mattia Binotto says F1 teams should decide for themselves which drivers they hire without pressure from engine providers.
Image: ANP Sport via Getty Images

Formula One teams should decide for themselves which drivers they hire without pressure from engine providers, Ferrari boss Mattia Binotto said as the sport awaits big announcements this week.

The Italian was speaking as champions Mercedes, Alfa Romeo and Williams are in the spotlight ahead of impending driver moves.

"I believe whatever is happening between a team and a driver, that should be between the team and a driver and as manufacturers we should not influence," Binotto told reporters at the Dutch Grand Prix.

"I think that would be wrong.

Valtteri Bottas is expected to move from Mercedes to Ferrari-powered Alfa as replacement for retiring fellow-Finn Kimi Raikkonen.

That would see George Russell move from Mercedes-engined Williams to the Mercedes factory team in an all-British lineup alongside seven-times champion Lewis Hamilton.

The Alfa Romeo team is run by Swiss-based Sauber with private owners, but their second seat has been occupied by Ferrari-backed drivers in recent years, with Italian Antonio Giovinazzi the current incumbent.

However, his place is also uncertain.

Mercedes want to find a seat for their newly-crowned Formula E champion Nyck de Vries while Red Bull are seeking to bring back Thai racer Alexander Albon with talks at both Alfa and Williams.

Mercedes boss Toto Wolff said at last weekend's Dutch Grand Prix that Albon would have to be released from his Red Bull contract before driving for a Mercedes-powered team.

However, Red Bull principal Christian Horner said that might not be necessary.

"I'm assured that Williams choose the drivers they wish to drive in the car and they don’t have restrictions," he said.

"Maybe we don't (have to release him). We've had very productive discussions with Williams, and with Alfa, and I expect the situation to hopefully be resolved in the next week or so."

Binotto said it was incorrect to state that Ferrari had a contractual right to one of the Alfa seats.

"Ferrari have never had a word on the 'Ferrari seat' on Alfa," he said.

"It was a contract between Alfa Romeo, so it was a right of the sponsor Alfa Romeo on the Sauber car."

Relations between Haas Formula One rookie team mates Mick Schumacher and Nikita Mazepin hit a new low on Sunday after the angry German said the ...
Motoring
9 months ago

Max Verstappen won his home Dutch Grand Prix for Red Bull on Sunday and took the Formula One championship lead in front of a roaring, dancing army of ...
Motoring
9 months ago

Red Bull are seeking to secure Alexander Albon's Formula One return next season, with seats opening up at Alfa Romeo and Williams, while Mercedes are ...
Motoring
10 months ago