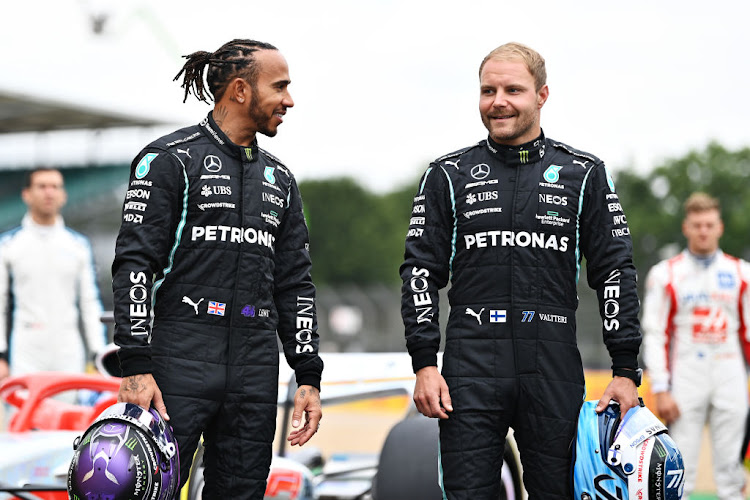 Seven-times world champion Lewis Hamilton hailed Valtteri Bottas as his best teammate after the Finn's move to Alfa Romeo from Mercedes in 2022 was announced on Monday.

Hamilton has won the title for the past four years with Bottas playing the supporting role, finishing runner-up in the championship in 2019 and 2020.

The Briton said in a message on social media that he was proud to have worked with Bottas, who is expected to be replaced by 23-year-old Briton George Russell.

“He has been the best teammate I've had the pleasure of working with,” Hamilton added. “Your speed and resilience has been impressive but where you truly stand out to me is the human being you are,” Hamilton told Bottas. “You are greater than you know and I know there’s a bright future ahead for you.”

Hamilton's first teammate, at McLaren in 2007, was double world champion Fernando Alonso. They ended that season level on points with Hamilton ahead on placings and the Spaniard departed after a falling-out with the team.

Finland's Heikki Kovalainen, who won only once in his F1 career, joined him in 2008 and 2009 before then-reigning world champion Jenson Button arrived at McLaren in 2010.

Button finished ahead of his compatriot in the 2011 season.

Hamilton moved to Mercedes for the 2013 season to replace Michael Schumacher alongside Nico Rosberg, a boyhood friend and rival who beat him to the 2016 title as the relationship swiftly turned frosty.

Bottas replaced Rosberg when the German announced his shock retirement at the end of the 2016 season.

“You will be missed. I wish you all the best for your future endeavours,” said Hamilton. “Let’s finish off strong and get that eighth for the team.”

Mercedes are leading Red Bull in the constructors' championship while Hamilton is three points behind Max Verstappen after the Dutch driver won his home race at Zandvoort on Sunday.

Valtteri Bottas will leave Mercedes and race for Ferrari-powered Alfa Romeo in a multi-year deal from 2022, the Swiss-based Formula One team said in ...
Motoring
9 months ago

Formula One teams should decide for themselves which drivers they hire without pressure from engine providers, Ferrari boss Mattia Binotto said as ...
Motoring
9 months ago

Relations between Haas Formula One rookie team mates Mick Schumacher and Nikita Mazepin hit a new low on Sunday after the angry German said the ...
Motoring
9 months ago