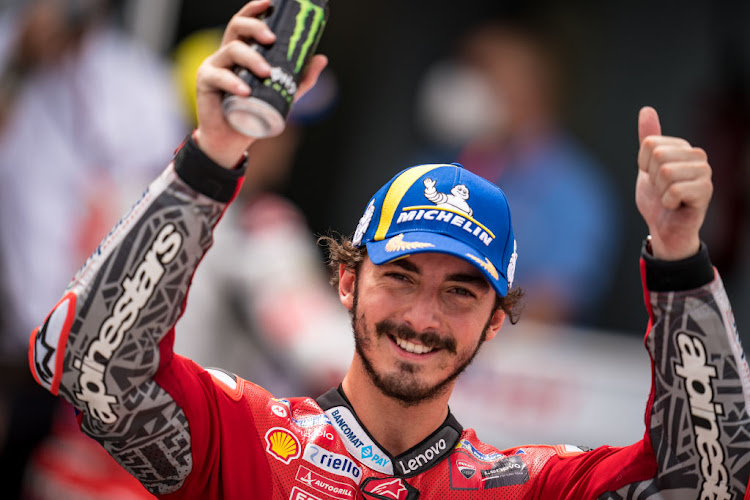 Francesco Bagnaia of Italy and Ducati Lenovo Team after his pole position during the qualifying session of the Gran Premio TISSOT de Aragón at Motorland Aragon Circuit on September 11, 2021 in Alcaniz, Spain.
Image: Steve Wobser/Getty Images

Francesco Bagnaia claimed his second pole of the season after setting a lap record at the Aragon Grand Prix in Alcaniz on Saturday, edging team mate Jack Miller in a Ducati one-two.

The pair were joined on the front row by world championship leader Fabio Quartararo of Yamaha while his closest challenger, Joan Mir of Suzuki, could only finish seventh fastest.

“I'm very happy, I started the weekend with a lot of questions about this track, I've struggled here,” Bagnaia said in a pit lane interview.

“But when I started these three days, the feeling was really great and I was happy about the bike. I improved the pace and the qualifying lap was incredible.”

Honda's Marc Marquez, looking to win at the track for a sixth time, set the early pace but starts fourth on the grid — his best qualifying result of the season.

Marquez will be joined on the second row by Jorge Martin of Pramac Racing and Aleix Espargaro of Aprilia. Martin's team mate Johann Zarco, who is third in the standings, starts back in 10th on the grid.

Carlos Sainz crashed his Ferrari heavily in final practice for the team's home Italian Grand Prix on Saturday as seven-time Formula One world ...
Motoring
1 week ago

Formula One could turn sprint races into stand-alone events next year with more points on offer and separate from Sunday's main grand prix, said ...
Motoring
1 week ago