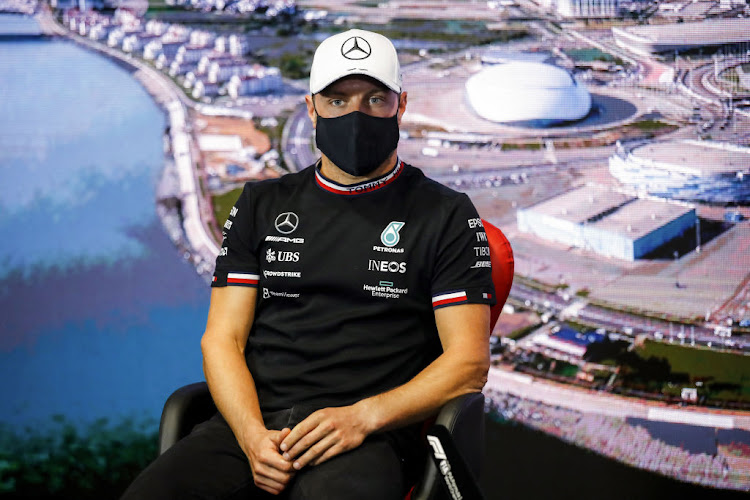 Valtteri Bottas talks in the drivers' press conference during previews ahead of the F1 Grand Prix of Russia at Sochi Autodrom on September 23 2021 in Sochi, Russia.
Image: Xavier Bonilla - Pool/Getty Images

Valtteri Bottas said he would “take one for the team” if Mercedes asked him to let title contender Lewis Hamilton overtake in Sunday's Russian Grand Prix.

Bottas won in Sochi last year and has a strong record in Russia, taking his first Formula One victory at the circuit in 2017. The Finn is third overall in the standings but 80.5 points behind Hamilton, with the seven-times world champion a further five adrift of Red Bull's Max Verstappen.

Mercedes have never been beaten in Sochi, winning every race since the first at the Winter Olympics venue in 2014.

Bottas, who is leaving at the end of the season to join Alfa Romeo, has yet to win a race this season.

“We have discussed many things internally, including different scenarios,” he told reporters on Thursday. “Every race is different. There could be times that we need to play as a team and I need to take one for the team and how the situation is, yes, I would do it.

“We are here as a team and we need to make sure that we win both titles, not only the constructors' but also drivers', and at the moment Lewis has the greater chance for that.”

Mercedes lead Red Bull by 18 points in the constructors' championship.

“Of course we want to maximise the points where we can and now is a great opportunity,” said Bottas. “We're definitely here to try to win the race.”

Max Verstappen hit back with sarcasm on Thursday after seven-times Formula One world champion Lewis Hamilton suggested his young Red Bull rival was ...
Motoring
3 weeks ago

Nikita Mazepin and Mick Schumacher will continue to race for Formula One tail-enders Haas next season, the US-owned team confirmed on Thursday
Motoring
3 weeks ago

Alfa Romeo's Kimi Raikkonen will return for this weekend's Russian Grand Prix in Sochi after missing the last two Formula One races because of a ...
Motoring
3 weeks ago