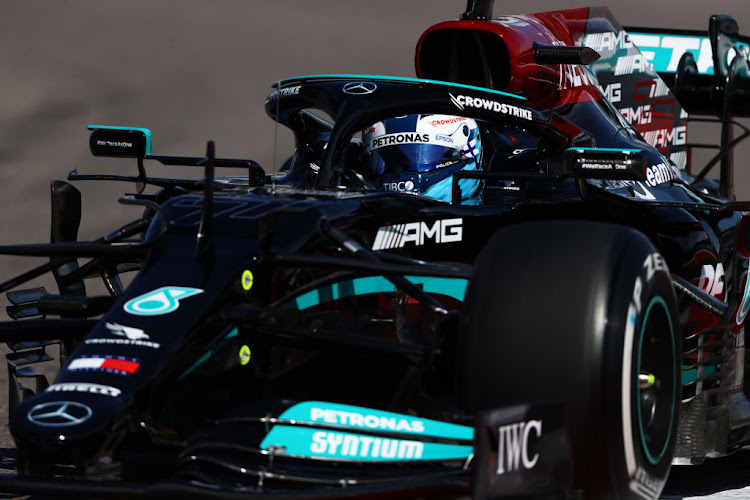 Valtteri Bottas during practice ahead of the F1 Grand Prix of Russia at Sochi Autodrom on September 24, 2021 in Sochi, Russia.
Image: Bryn Lennon/Getty Images

Valtteri Bottas led Lewis Hamilton in a predictable Mercedes one-two in first practice for the Russian Formula One Grand Prix on Friday.

Mercedes have won all seven races held in Sochi since the 2014 Winter Olympic venue first hosted a grand prix that year and Bottas has a strong record in Russia, winning in 2017 and 2020.

The Finn's best lap of 1:34.427 seconds on a dry track and soft tyres in a largely uneventful session was 0.211 quicker than Hamilton, a four-time winner in the Black Sea resort, also on softs.

Leclerc will be starting from the back of the grid on Sunday after a power unit change while Verstappen has a three-place grid penalty resulting from his collision with Hamilton at the previous race at Monza.

Verstappen leads Hamilton by five points in the standings after 14 of 22 races.

Mercedes are 18 points clear of Red Bull in the constructors' championship.

Bottas told reporters on Thursday that he would be prepared to “take one for the team” and let Hamilton win in Sochi if the situation arose. The Finn is leaving Mercedes for Alfa Romeo at the end of the season.

Norris spun after the session ended while on his way back to the pits but the damage appeared minimal.

“I think we should be back in the usual mix this weekend,” commented team boss Andreas Seidl.

“If we manage again to get everything together we should be in a good position to win a lot of points.”

Kimi Raikkonen returned for Alfa Romeo after missing the last two races due to testing positive for Covid-19.

The all-female W Series, which supports Formula One, has cancelled its Mexican round and will end the season with a race double at next month's US ...
Motoring
1 month ago

Valtteri Bottas said he would 'take one for the team' if Mercedes asked him to let title contender Lewis Hamilton overtake in Sunday's Russian Grand ...
Motoring
1 month ago

Miami has been given a May 8 date for the city's first Formula One race around the Hard Rock Stadium next year, organisers said on Thursday
Motoring
1 month ago