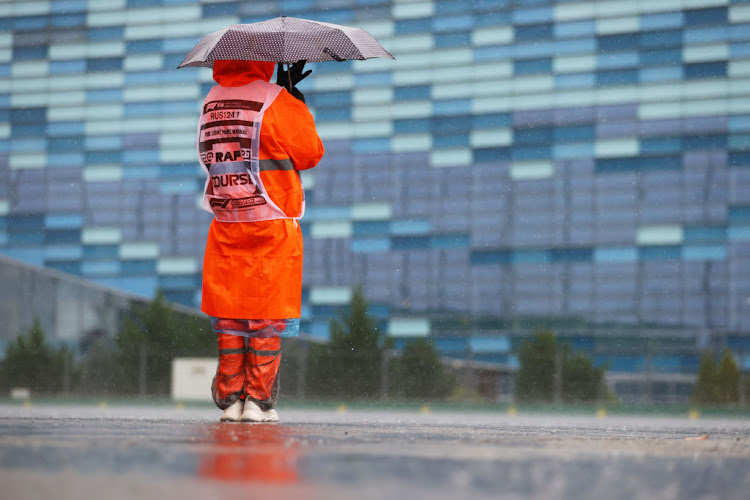 A track marshal shelters under an umbrella at the rain-sodden Sochi Autodrom on September 25, 2021 in Sochi, Russia.
Image: Bryn Lennon/Getty Images,

Final practice for the Russian Formula One Grand Prix was cancelled due to heavy rain in Sochi on Saturday, with later qualifying uncertain and at risk of being postponed until Sunday.

Race stewards said in a statement that the decision had been taken for safety reasons and due to force majeure.

A Formula Three race that was originally scheduled for Saturday morning was held on Friday and a Formula Two race was postponed.

“From what we are seeing from the forecast side ... we will have sort of this level of rain until about 1.30 to 2pm local time and then it decreasing in the afternoon,” said race director Michael Masi.

“The priority from today's perspective is obviously Formula One qualifying this afternoon, so Formula One will take priority.”

Masi said the light would be the determining factor in how late qualifying could be postponed until.

“Sunset locally is about 1815 ... but with weather conditions like this obviously (the) light diminishes far earlier,” he added.

“If qualifying isn't able to happen today, as we've seen a few times before in the past, then we will redo the programme and hold qualifying on Sunday morning.”

Valtteri Bottas led team mate Lewis Hamilton at the top of the time sheets as Mercedes dominated the opening day of Formula One practice for the ...
Motoring
7 months ago

Max Verstappen hit back with sarcasm on Thursday after seven-times Formula One world champion Lewis Hamilton suggested his young Red Bull rival was ...
Motoring
7 months ago