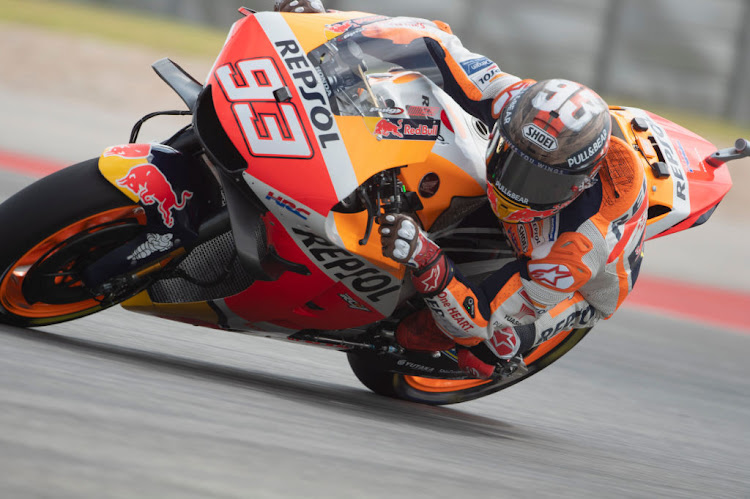 Marc Marquez on track during the MotoGP Of The Americas in Austin, Texas.
Image: Mirco Lazzari gp/Getty Images

Six-times world champion Marc Marquez led from start to finish to secure a seventh win at the Grand Prix of the Americas on Sunday as Fabio Quartararo finished in second to strengthen his grip on the MotoGP world championship race.

Repsol Honda's Marquez, who was third on the grid, made an impressive start as he charged through the first turn to grab the lead ahead of pole sitter Francesco Bagnaia and Quartararo, eventually opening a gap of more than four seconds with five laps to go.

"The plan was exactly how the race went. Start fast, a bit slow in the first laps and then increase the gap when the level around me drops," said Marquez after his second win of the season.

"I was comfortable but it was difficult to concentrate in the end. But I also knew that Fabio was far and locked down because of the championship race. So everybody is happy today."

Quartararo said that second place tasted even sweeter than victory.

"Physically, it was difficult. But good to see the result and also the American fans. I have gained an advantage in the championship, so I'm happy," said the Frenchman.

Bagnaia struggled after his poor opening and slipped down to sixth before going past a fading Jorge Martin of Pramac Ducati with three laps remaining to salvage third place. Alex Rins of Suzuki Ecstar came fourth.

Quartararo leads Italian Bagnaia by 52 points with three rounds to go and can clinch the title at Misano in three weeks' time.

Ducati's Francesco Bagnaia ended Marc Marquez's run of seven straight poles at the Grand Prix of Americas on Saturday as he topped qualifying and ...
Motoring
7 months ago

Aprilia MotoGP rider Maverick Viñales will miss this weekend's Grand Prix of the Americas in Austin, Texas, after the death of his 15-year-old cousin ...
Motoring
7 months ago

Argentina will stay on the MotoGP calendar until 2025 after the race at the Termas de Rio Hondo track was cancelled for the last two years due to ...
Motoring
7 months ago