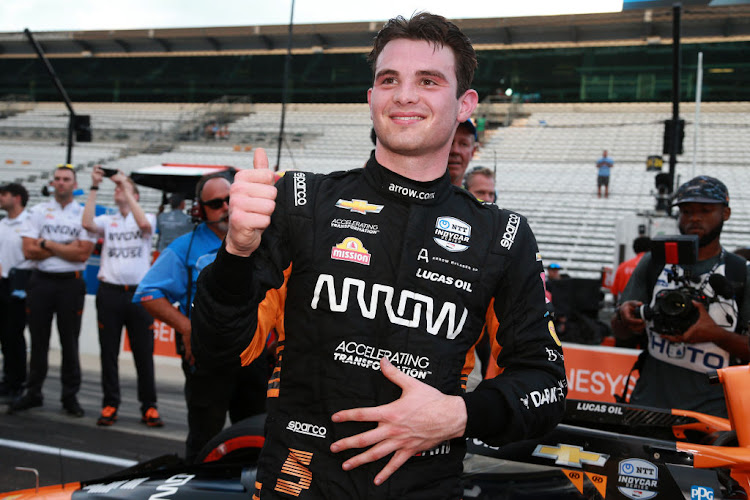 Pato O'Ward jokes that he would be a billionaire if he had banked a penny every time he was asked about his Formula One prospects and the 22-year-old Mexican IndyCar driver can expect no let up now.

The rising star of the US-based open-wheel series, third overall with two wins for the Arrow McLaren SP team and a fourth place at the Indianapolis 500, will test with McLaren's F1 team in Abu Dhabi in December.

The outing is a reward for his first IndyCar win at Texas Motor Speedway in May, and O'Ward was fizzing as he visited the Woking factory for a seat fitting and time in the simulator.

“Formula One. That’s where this dream starts,” the Monterrey native told Reuters.

“Whoever tells you that they didn’t start there is lying, because it’s F1 man. It’s what you look at when you’re a kid.

“That’s where my passion for motorsports started, with this car right down here — the 2008 car,” added O'Ward, signalling in the direction of the McLaren that took Britain's Lewis Hamilton to the first of his seven titles.

It is a car he hopes McLaren boss Zak Brown will also let him drive one day, maybe if he wins the IndyCar title or Indianapolis 500.

“That’s actually one of the ideas I got for a next bet with him,” said O'Ward. “When I see him I’m going to tell him ‘Man, let’s make another bet’.”

Double world champion Fernando Alonso was a boyhood idol too, the Spaniard now a friend after they raced together at Indianapolis in 2020, and ex-F1 driver and IndyCar rookie Romain Grosjean is also a mate.

“I’m going to text him in the next couple of weeks and pick his brain a little bit to see what he has to say about the F1 cars,” said O'Ward of the Frenchman.

Winning a title would strengthen O'Ward's hopes of jumping from one McLaren team to the other, but in the meantime he tells those eager to enquire about his future to just enjoy what he's doing.

“Enjoy me racing in IndyCar, competing to win and if it comes about in a couple of years to be in Formula One then you get to cheer for me in Formula One. But, like, enjoy where I’m at,” he said.

“I’m so happy where I’m at right now and I feel I’m in a great place.

“If the F1 stuff does come into fruition for my future it would be with this team and for that same goal we have in IndyCar, to win races and win championships.”

Mexico has only one F1 driver, race-winner Sergio Perez at Red Bull, while the US has none in a series owned by US-based Liberty Media and with growth plans for North America.

That could change if Sauber-run Alfa Romeo get taken over by Michael Andretti, with speculation that 21-year-old American Colton Herta could then make the switch to the lowly-placed Swiss team.

O'Ward said it would be a tough one to turn down.

“If he (Herta) does leave, and he does come to Formula One ... he is leaving a car that can win the 500 and that can win the championship in IndyCar,” he added. “But F1 chances come once and sometimes never.

“You can’t pick and choose when you take it. I won’t believe it until it actually happens. But from the sounds of it, it could very well happen.”

The undisputed top driver in the NASCAR Cup Series in 2021 earned the chance to finish his best season off with a championship on Sunday when he won ...
Motoring
1 month ago

Formula One's governing body approved a 2022 calendar on Friday featuring a record 23 races. These are the dates to pencil into your calendar
Motoring
1 month ago

It was the morning of September 16 when I fielded a WhatsApp call from my mate and air-cooled Porsche restorer, Wernher Hartzenberg. And after ...
Motoring
1 month ago