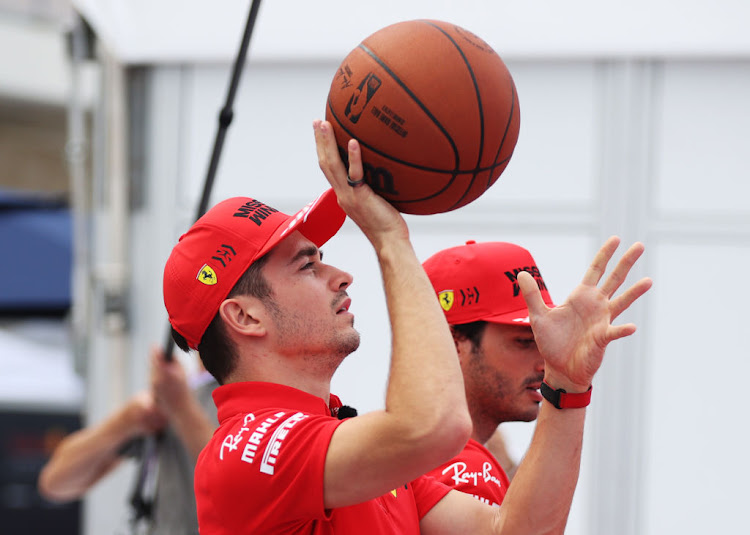 Charles Leclerc and Carlos Sainz play basketball on the NBA court in the paddock during previews for the F1 Grand Prix of USA at Circuit of The Americas on October 21, 2021 in Austin, Texas.
Image: Chris Graythen/Getty Images

Ferrari Formula One driver Charles Leclerc missed his US Grand Prix flight this week after an official at the airport closest to his Monaco home questioned his travel authorisation, he said on Thursday.

The 24-year-old told reporters at the circuit in Austin, Texas, that he had made an unscheduled detour via New York after missing his original flight from Nice in the south of France due to the mix-up.

“My NIE (National Interest Exception) hadn't been accepted at the airport, so I couldn't take the original flight, so we changed the flight and went to New York last minute,” Leclerc explained.

“It was just one guy at the airport of Nice that for some reason didn't really know what was an NIE, and I got stuck there.

“He only realised one minute before closing the flight that the NIE was OK, but I didn't have my passenger locator form, so I had to stay in Nice.”

Leclerc said he flew instead to New York, a city he had never before visited, and spent a day there before going on to Milwaukee for the first NBA match of the season.

Foreign citizens are unable to travel to the US due to the Covid-19 pandemic, unless they fall into one of a number of exempt categories that includes sportspeople.

Yamaha on Thursday announced the signing of Moto3 talent Darryn Binder. He will be joining Yamaha‘s rebranded RNF MotoGP Team‘s rider line-up for the ...
Motoring
3 months ago

The all-female W Series ends its second season in Texas this weekend with Britons Alice Powell and Jamie Chadwick tied at the top and racing for ...
Motoring
3 months ago

Lewis Hamilton and Max Verstappen have traded the Formula One championship lead four times in six races and Sunday's US Grand Prix in Austin could ...
Motoring
3 months ago