Quartararo finds redemption in 2021 after year of disappointment 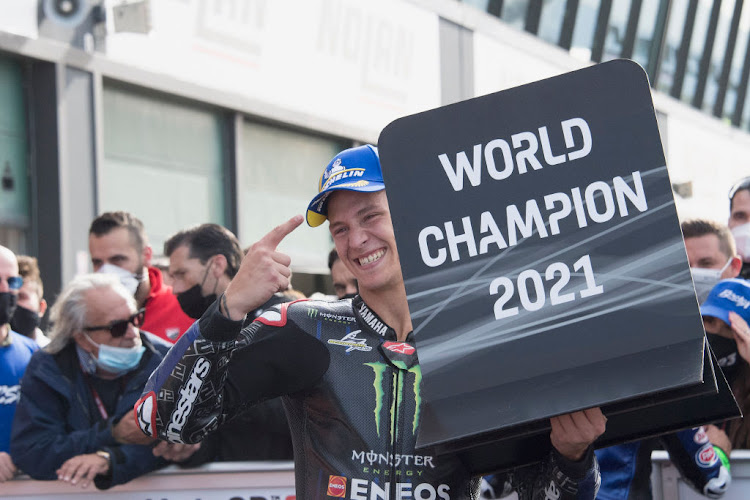 Fabio Quartararo had never won a title in Moto3 or Moto2 but on Sunday the Yamaha rider became the first Frenchman to win the MotoGP world championship in spectacular and unexpected circumstances at the Emilia Romagna Grand Prix.

Quartararo's closest title contender Francesco Bagnaia was in the lead and looked set to shift the title fight to Portugal when the Ducati rider crashed with five laps to go, giving the Frenchman, who finished fourth, an unassailable lead.

The tears started to flow in the pit lane as 22-year-old Quartararo, the son of a locksmith and a hairdresser, let the moment sink in. "El Diablo" had ended nine years of Spanish dominance with two races to spare.

"I have no words and I have no more liquid left in my body to cry," Quartararo said.

"MotoGP has been going on for quite a long time. To be the first Frenchman to win it is amazing. I'm also happy for Yamaha. Since 2015 they didn't win a title."

Quartararo had finally got his due after a disastrous 2020 season where he had won the most races in a season shortened by the Covid-19 pandemic but still finished eighth in the standings after 14 rounds.

Six-times champion Marc Marquez's crash in the curtain-raiser in Jerez last year had ended his season and the next generation smelled a rare opportunity. Quartararo seized it, winning the first two races to build a sizeable lead.

But things quickly unravelled for Yamaha as performance issues stalled their progress. Quartararo's only podium thereafter was a victory in Catalunya, after which he dropped down the standings despite securing two more poles.

Calm after the storm

A move to the factory team this year after a straight swap with his idol Valentino Rossi proved to be the catalyst for both Quartararo and Yamaha as they looked to reel in the faster Ducatis and a resurgent Marquez who made a late charge.

Quartararo had watched on when Bagnaia won the Moto2 title in 2018, their last season before the step up, and the Italian proved to be a worthy opponent with four poles – the same as the Frenchman.

But this time, Quartararo found a measure of consistency that helped him build a lead after wins early in the season in Doha and Portimao.

Apart from five victories in 16 rounds so far, he also achieved five more podium finishes and scored points in every race.

Where anger and frustration was a common feature last season due to technical problems, Quartararo was more relaxed this year after working with a sports psychologist.

Penalties cost him positions – one for unzipping his leather suit in Catalunya – but he motored on without complaints.

"Even if you are in a bad moment, stay calm and you will make a step. So being calm was something that made me grow a lot and that's why this year I stayed calm," Quartararo said.

Yamaha's Fabio Quartararo became the first Frenchman to win the MotoGP world championship after a fourth-placed finish in the Emilia Romagna Grand ...
Motoring
8 months ago

Riders competing in MotoGP's three classes must be at least 18 years old from 2023 after the sport announced safety changes on Friday following three ...
Motoring
8 months ago

Yamaha on Thursday announced the signing of Moto3 talent Darryn Binder. He will be joining Yamaha‘s rebranded RNF MotoGP Team‘s rider line-up for the ...
Motoring
8 months ago