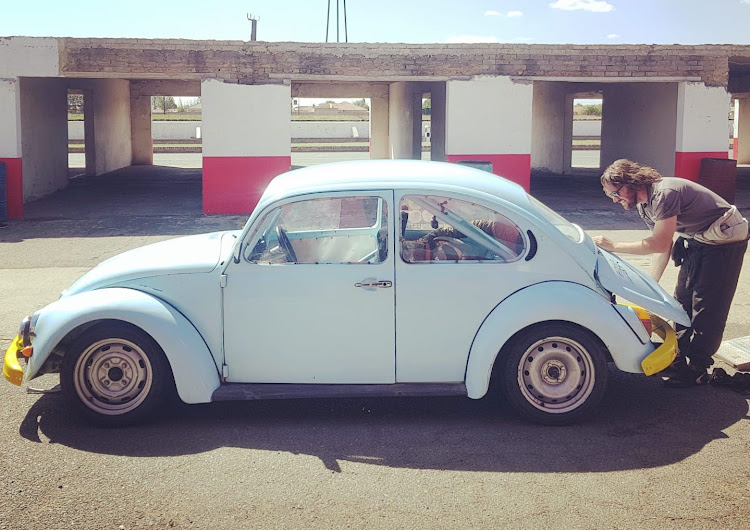 As per usual things have been hectic in the Team Short-Shifters camp.

This Saturday past was particularly busy as we had to trailer-up our ever-improving Volkswagen Beetle and haul it on over to MF Autobody in Boksburg for the 24 hours of ILamuna scrutineering session. The place was a proper hive of vehicular activity as all the competing teams slowly trickled in with their challengers in tow. Some were suspiciously trick (Wilwood brakes, really?) while others looked like they had literally crawled out of the nearby Scrapyard of Death. With jet airliners thundering sporadically over our heads (MF Autobody is right on the approach path for OR Tambo — plane-spotting heaven) a rambunctious posse of scrutineers gave our Volksie a thorough going over. Amazingly, they found no fault with it and we were, from a red-tape standpoint, all good to go.

And go we did. After pulling the Bug back on to the trailer we headed out to Midvaal Raceway for our very first shakedown session. While I worked out how to set the shift light on our fancy new tachometer (pretty much the limit of my mechanical ability), the rest of the guys performed a quick bolt check, levelled the tyre pressures and inspected the engine bay for oil leaks. The latter was imperative as a main oil hose had dislodged itself the night before after Hartzenberg had started the car up to move it out his garage.

Everything looked dandy so we took to the track with each driver soon clocking in about five or six laps. Now I've never piloted a classic racing Beetle before and I must say that, all things considered, this one isn't all that bad. The little 1700-and-something-cc engine pulls with acceptable conviction (sounds great too) and the old long-throw, four-speed manual gearbox swaps cogs without much fuss. While the brakes leave a lot to be desired (we suspect that aged master cylinder still isn't 100%), handling is reasonably tidy with a surprisingly sharp turn-in and decent mechanical grip. It's bloody lively though — perhaps it's the suspension geometry (or lack of) but you find yourself continually correcting and counter-steering through even the most mundane of corners. Yep, it twitches and tramps its way around the racetrack like a greasy weasel with bad case of fleas — a proper hoot.

After about an hour we took five to check the car's engine oil level. Satisfied that there was still enough inside it, Hartzenberg started his second stint. And then just as he hit the main straight we noticed a big plume of white smoke curl up from under the car. Something was seriously amiss, so we called him in immediately to see what the issue was. Long story short is that one of the oil hoses connected to the oil cooler had blown right off, spilling most of our fresh and very expensive Motul oil around the last half of Midvaal Raceway (Sorry Nino). With no spares and no way to fix the problem we threw in the towel and towed the car back to the garage so see if any further damage had been incurred.

Luckily the engine is OK with no damage to the bearings of valvetrain. Yep, we even ran some cheap oil through the motor to see if there were any telltale iron filings lurking inside it — thankfully there was nothing. Now deeply suspicious of the braided oil hoses that had failed twice in less than 24 hours, we decided to scrounge up yet more money to buy a more robust set from Hydra Part. Similar in size and structure to the plumbing you might find on an old Porsche 911, they should hopefully do the trick.

Aside from sorting out these pesky pipes we've also been really busy applying the car's fresh new race livery. But we'll cover that in another post so be sure watch this space.

It's been a week since I posted my first 'Road to ILamuna Update' and, oh boy, has a whole lot been on the boil since then. The biggest news so far ...
Motoring
3 months ago

It was the morning of September 16 when I fielded a WhatsApp call from my mate and air-cooled Porsche restorer, Wernher Hartzenberg. And after ...
Motoring
3 months ago

Kyalami Grand Prix Circuit will once again host the Intercontinental GT Challenge season finale. Set to run from December 2 to 4, this prestigious ...
Motoring
2 months ago