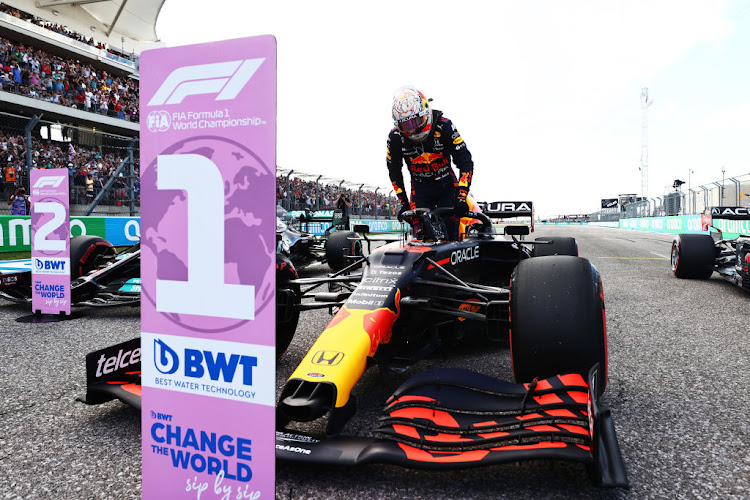 Pole position qualifier Max Verstappen climbs from his car in parc ferme during qualifying ahead of the F1 Grand Prix of USA at Circuit of The Americas on October 23, 2021 in Austin, Texas.
Image: Mark Thompson/Getty Images

Pole position should be awarded to the fastest Formula One driver in Friday qualifying on those weekends when a Saturday sprint race is held, according to the sport's MD Ross Brawn.

The subject has been much debated after a trial of the sprint format this season at three grands prix, with six under discussion for 2022.

Pole position for regular races is decided in qualifying on Saturday, with the fastest lap in the final phase taking the top slot.

Under the sprint format, qualifying is on Friday and sets the grid for a 100km Saturday race whose winner starts Sunday's main event from pole position.

“It’s been a consistent comment among fans and media and drivers that the person who does the fastest single lap with low fuel in that competition is the pole position holder,” Brawn told reporters on Monday.

“I guess we hadn’t really considered that, if I'm honest, when we set out this new format.

“Personally I would like to see a reversion to that being pole position but these things are decided with the (governing) FIA and the teams.

“There is broad opinion that Friday should be (counted as) pole position for the sprint weekends, so that's something I would hope we can get through for next year ... I'm optimistic on that one.”

Four-time world champion Sebastian Vettel, who has 57 career poles and ranks fourth in the all-time lists, was critical of the statistics recording a race win as a pole position when it was tried out for the first time at Silverstone in July.

So too was retired 2016 world champion Nico Rosberg, who achieved 30 poles.

“Pole 100% has to go to the fastest guy in qualifying. The sprint race winner should not be awarded pole position. That will totally cannibalise the historic F1 statistics,” Rosberg said at the time on Twitter.

Every Formula One grand prix promoter wants to hold a sprint race but only six are likely next season after the experiment of three this year, F1's ...
Motoring
3 weeks ago