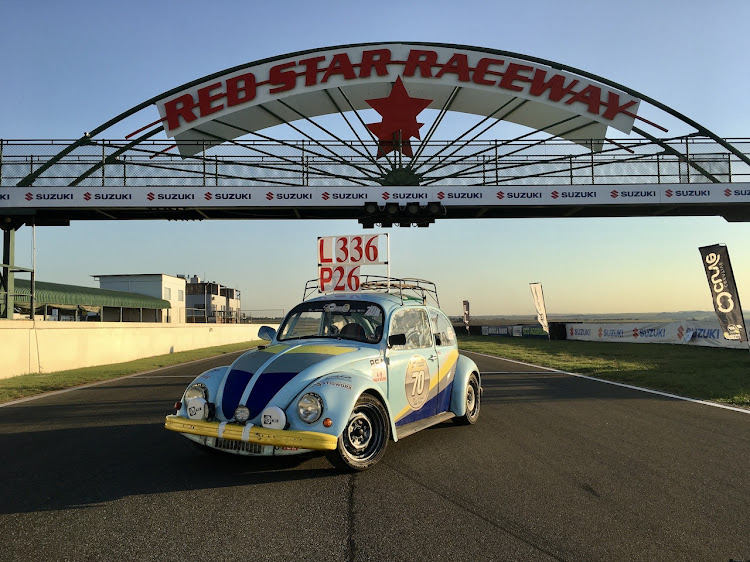 Despite a damaged engine the Team Short-Shifters Beetle finished 26th overall in the 2021 24 hours of ILamuna.
Image: Thomas Falkiner

If you had asked me two weeks ago whether our ratty old 1965 Volkswagen Beetle would complete the inaugural 24 hours of ILamuna, I probably would have said "no." For the simple reason that despite our hard work (all involved sweated blood over this car), we simply didn't have enough testing under our belt: long hours at the racetrack spent beating out all the inevitable gremlins that come with any new build. Even though the Beetle fired right up and roared around the block without any issues, the abuse of 24 hours at race pace would surely cause something to fail or go on the fritz.

But, hey, we had bought the ticket and now it was time to take the ride. After a surprisingly fault-free Friday night practice session, I was entrusted with Saturday morning qualifying duties when a combination of fresh tyres and a near-empty fuel tank helped me clock a flying lap time of 2:36.075 — good enough for 19th on the grid (there were 43 cars in total).

Next up was the race itself, which began with sirens and fireworks at 3.42pm (it was delayed due to an unfortunate medical emergency requiring a helivac) on Saturday afternoon — a classic Le Mans-style start where drivers had to run from one side of the track to their cars waiting at the other. Wernher Hartzenberg took the honours and after strapping himself into his seat impressively fast, soon settled down in a comfortable midfield position where he circulated sans any drama until our first driver change at 6pm. 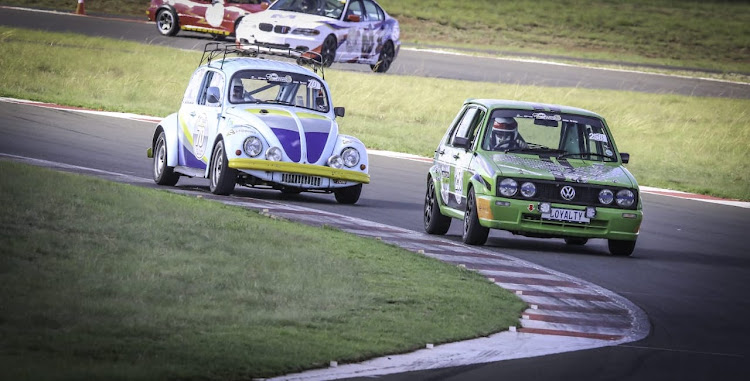 The 24 hours of ILamuna attracted a variety of cars. Ours was the oldest.
Image: Andrew Kynaston

Next behind the wheel was Jesse Adams, who upped the pace with a string of quick and consistent lap times until a transmission issue forced him into the pits — he could no longer select third gear. After putting the car on axel stands we discovered an adjuster was out of alignment and was preventing the selection of third gear. Luckily it was a quick fix and after about 15 minutes, Adams was sent back out to finish his stint.

Just after the clock struck 9pm Stuart Grant took over and rumbled out into the night, where our strange mixture of original halogen headlamps and aftermarket Chinese LED spotlights struggled to penetrate the inky blackness. So much so that he boxed to find out if the spotlights were in fact working. They were. Despite his obvious frustration, Grant soldiered on until team principal Derrick Dearlove radioed him to come in. So, finally, after a 12-and-a-half-hour wait, it was my turn to pilot the Beetle around the track.

Probably the most comfortable around Red Star Raceway in the dark (I've done countless laps of this place racing in the Lotus Challenge series), I was determined to get us up the order. I put the hammer down, kept it consistent and made the most of familiarity. Not to mention the Beetle's reliability. Since sorting out the gear selection error, the little Bug had been lapping like a champion: tyre wear was good, oil pressure ample and the all-important temperature gauge always on the right side of the 100ºC mark. It was also handling fantastically well. Although many cars were faster down the straights, I had no problem reeling them in around the twisty bits. Especially the yellow, taxi-themed Hyundai Sonata that I scrapped with for well over 15 laps — a cat and mouse battle royale that finally ended when the driver pitted for fuel during yet another safety car period. 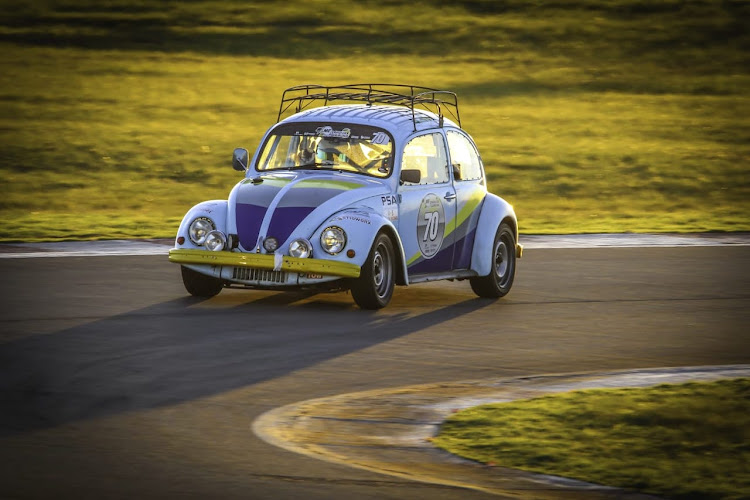 Unfortunately soon after that we had our first piece of really bad luck — a slipping clutch. At first it was only noticeable in fourth gear but pretty soon it started affecting third as well. As these were the only two gears we were using, my only option was to come into the pits at 2.30am and have it seen to. We thought it could have been a simple clutch cable adjustment but after closer inspection it was clear it was something far worse.

Long story short is that a failed gearbox seal was letting engine oil blow onto the clutch, which was in turn causing it to slip. This meant we had to remove both the engine and the transmission to try to fix the fault. However, when we did this we discovered we didn't have a spare of the damaged seal. Well, not on us anyway. So as soon as curfew lifted at 4am, Werner Alker and Wernher Hartzenberg's father, Ludwig, hit the highway to Pretoria where a suitable replacement was waiting. They got back to the track at around 7am and by 8am Adams was strapped back in the car and circulating with a 100% functioning transmission — an absolutely incredible effort from all involved.

In the night we had managed to work our way up to 17th overall but thanks to this gearbox drama we had sunk all the way down to 33rd. Fortunately some other teams also started having problems of their own. Indeed, the gruelling nature of this event was starting to take its toll on tired machinery and we were able to gain a few places during Adams', Grant's and Hartzenberg's final stints. Then, once again, trouble struck when I got into the car for the last time at 2pm to tackle the home stretch. During braking for the tight right-hander at the end of the main straight my throttle jammed wide open, causing the engine to momentarily rev right off the gauge — past an indicated 11,000rpm. 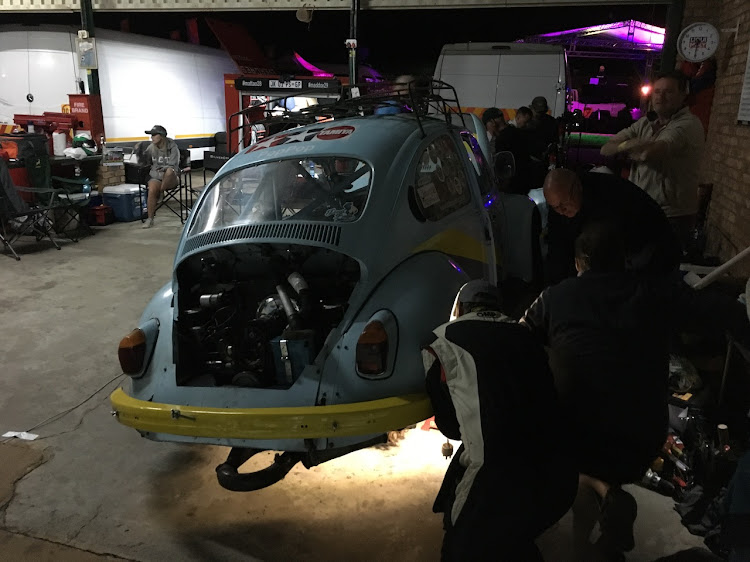 Considering this engine redlines at 6,000rpm, I thought our race was over. Backing up my suspicions was a terrible groaning/rumbling noise at speeds over 3,000rpm. Once again I pitted and expected the absolute worst: an engine bay full of oil and molten metal from exploded valves and pistons. Incredibly, and a testament to engine builder Harry Lombard, the engine was hurt but still operational. After readjusting an out of place tappet cover (well spotted, Werner Alker) I was sent out to circulate as fast as the motor would allow. With 90 minutes to go I diligently changed gears at 3,000rpm and kept an ever watchful eye on the oil pressure gauge. It was slow and terrifying going, with every new clunk, groan and rattle putting the fear of god into me. I didn't want to fail and I didn't want the hopes of our hard-working team dashed by a DNF.

Eventually, however, I got the radio message that there were only 15 minutes to go. Then 10. Then five. After what seemed like an entire day spent out on the track I piloted the ailing Beetle past the checkered flag and the entire Short-Shifters team who were literally pouring over the pit wall — a blur of excited human figures yelling and waving and fist-pumping. It was an incredible feeling and one tinged with emotion. And a good few tears that were thankfully hidden behind the smoked visor of my sweat-sodden helmet.

In the end we finished in 26th place and clocked up 336 laps — a total of 1,344km. Considering that we only really started working on the car roughly a month before the race, I think it's a result well worth celebrating. It was also one hell of an event. I've done many races in my life but the 24 hours of ILamuna is one that will take some beating. From the awesome vibes and great camaraderie (everybody is willing to help each other out) to the surprisingly gentlemanly way drivers treated each other on track, it's something I'd recommend to any grassroots motorsport enthusiast. Do it right, do it within budget with a real lemons like ours and you'll make memories to last you a lifetime. I know we did.

One of the most exciting things about prepping a race car is applying a livery: vehicular war paint that instantly gives it a look and personality ...
Motoring
6 months ago

As per usual things have been hectic in the Team Short-Shifters camp. This Saturday past was particularly busy as we had to trailer-up our ...
Motoring
6 months ago

It's been a week since I posted my first 'Road to ILamuna Update' and, oh boy, has a whole lot been on the boil since then. The biggest news so far ...
Motoring
6 months ago