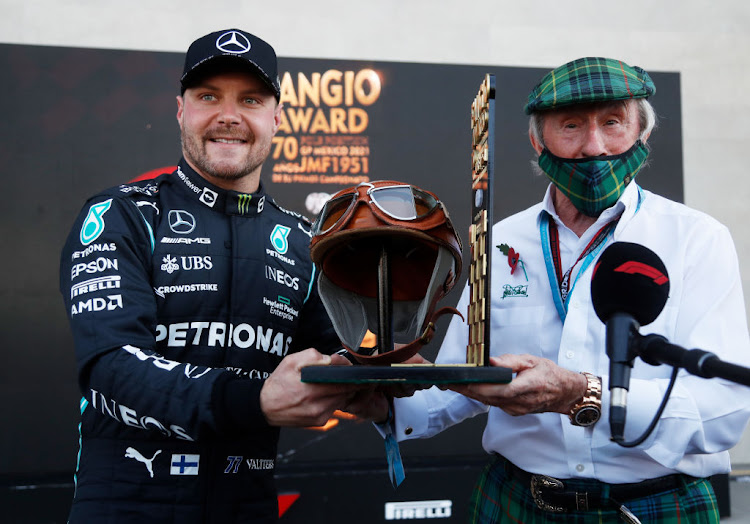 Triple world champion Jackie Stewart will pay tribute to Formula One great Juan Manuel Fangio on Wednesday when the Argentine's last remains are moved to a new resting place in a museum alongside his cars.

This year marks the 70th anniversary of the first of Fangio's five world championships with four different constructors.

“I'm carrying his remains to his racing car collection. He was the greatest driver of all time,” Stewart said at the weekend's Mexico City Grand Prix.

The Scot presented Mercedes driver Valtteri Bottas with a replica of Fangio's 1950s helmet and goggles for taking pole position.

Stewart, 82, was one of six pallbearers who carried the 84-year-old's coffin to the cemetery at the 1995 funeral in the Argentine city of Balcarce, to the west of Mar del Plata.

The other five, who included Fangio's former team mate Stirling Moss and Argentine racers Carlos Reutemann and Jose Froilan Gonzalez, have since died.

The procession around Balcarce on Wednesday, ahead of next weekend's Brazilian Grand Prix, will feature cars from the museum and local clubs.

“I'll never forget what happened that day,” Stewart recalled of the funeral in Gerald Donaldson's biography of the man whose five titles have been surpassed only by the seven of Michael Schumacher and Lewis Hamilton.

“There must have been 10,000 people gathered outside in the square, standing there in total silence. Absolutely amazing. And suddenly they just started to clap — 10,000 people clapping in slow motion.

“They were all in tears — 10,000 people in tears — and they all just wanted to touch the coffin of Fangio ... it was one of the most important things I have ever done in my life. I was an enormous fan of his.

“More than a fan, a great admirer of the manner in which he conducted his life, presented himself and represented the sport.”

Fangio dominated the first decade of grand prix racing and won the 1951 and 1954-57 world championships before retiring in 1958.

A new mausoleum has been built at the museum a few blocks away from where he was born in 1911.

Hamilton clarifies his comments about Bottas and Perez

Seven-time Formula One world champion Lewis Hamilton moved on Monday to defuse comments he made about Mercedes team mate Valtteri Bottas and Red ...
Motoring
2 weeks ago

US motor racing entrepreneur Michael Andretti said on Thursday that 'control issues' had led to the collapse of takeover talks with the owners of ...
Motoring
3 weeks ago