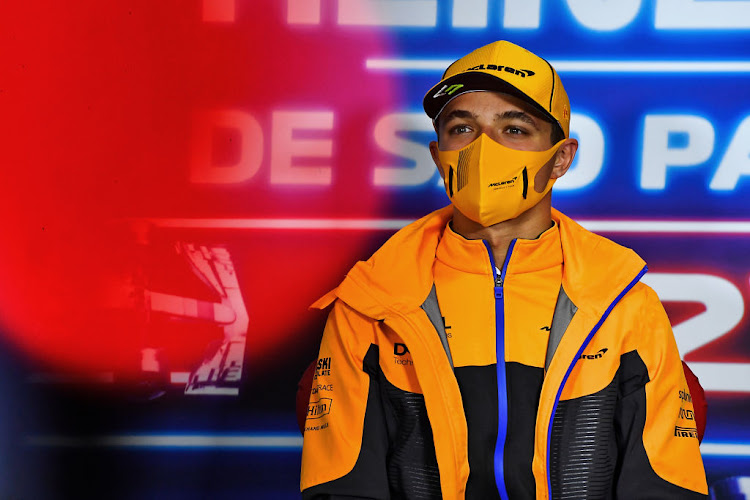 Lando Norris speaks in the Drivers Press Conference during previews ahead of the F1 Grand Prix of Brazil at Autodromo Jose Carlos Pace in Sao Paulo on November 11 2021.
Image: Rudy Carezzevoli - Pool/Getty Images

McLaren's Lando Norris paid tribute to his boyhood idol Valentino Rossi on Thursday and revealed they had exchanged text messages ahead of the Italian MotoGP great's final race this weekend.

Norris, 21, wore a Rossi tribute helmet at the 2019 Italian Grand Prix and the two have kept in touch since they met at Silverstone that year.

"He sent me a message last night, just because he is going into the final race of his career," the British Formula One driver told reporters ahead of the Sao Paulo Grand Prix at Brazil's Interlagos circuit.

"It's sad times. I'm going to miss him. He was the guy I watched when I was four, five, six years old. He got me into racing, got me onto a motorbike first," Norris added.

"He's been the guy that I've looked up to, the guy who's kind of helped me get to this position where I am, because probably, without watching him, my ambition of being a racing driver wouldn't have been so high."

Norris would not divulge the details of Rossi's text and said it was in response to a "little heartfelt message" he sent saying how much he would miss him and congratulating him on what he had achieved.

Rossi, 41, is retiring after Sunday's season-ending race in Valencia, Spain, and will hang up his helmet as a nine times world champion with seven titles in the top category of motorcycling.

Norris said he and Rossi talked "now and then" and still had plans to do some car racing together, mentioning GT sportscar events such as 12-hour races in Abu Dhabi and Dubai,  or even online.

"It's not just motorbikes that he likes. He loves car racing as well ... If he can spend a bit more time to come to an F1 race, that is the plan for something we want to try and do together," he said.

Seven times Formula One world champion Lewis Hamilton, who swapped machinery with Rossi for fun at an event in Valencia in 2019, also paid tribute to the Italian.

"It's obviously sad to see Vale stopping, but I think his drive, his approach, just everything he's done has been incredible," said the Mercedes driver.

"The passion that he's had for so long has shown through. And just such a legend, one of the greatest to ever do it."

Formula One teams prepared to work late into the night on Thursday to get their cars ready for the Sao Paulo Grand Prix after freight, including ...
Motoring
6 months ago

Lewis Hamilton stayed onside with his Brazilian fans on Wednesday by calling up soccer star Neymar ahead of a big weekend for the Briton's bid for a ...
Motoring
6 months ago

Formula One leader Max Verstappen can sprint to his third win in a row in Brazil on Sunday but Lewis Hamilton and Mercedes intend to hit back hard ...
Motoring
6 months ago