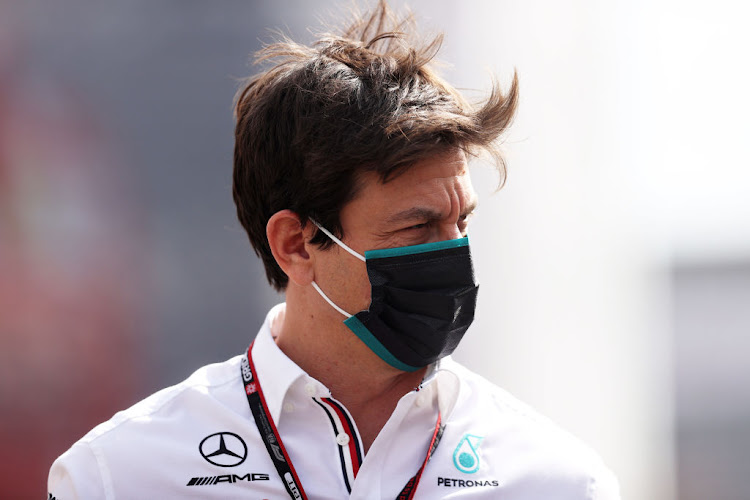 Toto Wolff said Max Verstappen should have been handed a five second penalty 'at least' for going too far in defending against Lewis Hamilton during the Sao Paolo GP.
Image: Lars Baron/Getty Images

Lewis Hamilton celebrated a memorable win in the Sao Paulo Grand Prix for Mercedes on Sunday, but team boss Toto Wolff hit out at "laughable" decisions that went against his Formula One champions.

Seven-times world champion Hamilton had a rollercoaster ride over the weekend, starting with qualifying fastest and then being demoted to last on the grid for Saturday's sprint race when his car failed a technical check.

The Briton fought back from 20th to fifth in that race before dropping to 10th on Sunday's grid due to an engine penalty.

In the race he and Red Bull's championship leader Max Verstappen went wheel-to-wheel, with the Dutch driver defending so firmly that both cars ran off the track before Hamilton prevailed.

"The whole weekend went against us. We had a broken part on our rear wing which we couldn't look at, couldn't analyse, failed the test and got disqualified. Very harsh," Wolff said of the qualifying drama.

"And on the Red Bull, repairs three times in a row on their rear wing while  being in parc fermé with no consequence."

Wolff said Verstappen should have been handed a five second penalty "at least" for going too far in defending against Hamilton, but stewards instead decided to take no further action.

"Just brushing it under the carpet is just the tip of the iceberg. It's laughable," said Wolff.

"I think the stewards have a difficult life anyway. Whatever decision they take, one team is going to be grumpy.

"In a certain way, when you are taking punches all weekend and then you have such a situation on top of everything, you are losing faith in a way."

Michael Masi, the governing FIA's race director, told reporters all drivers and teams were treated equally and fairly at all times.

"Obviously if you are on the receiving end of a penalty I think everyone feels unfairly treated," he said.

Ducati's Francesco Bagnaia claimed his fourth victory in the last six MotoGP races at the season-ending Valencia Grand Prix on Sunday as nine-times ...
Motoring
3 weeks ago

Formula One stewards fined Red Bull's championship leader Max Verstappen €50,000 (roughly R876,718) on Saturday after he touched and examined the ...
Motoring
3 weeks ago