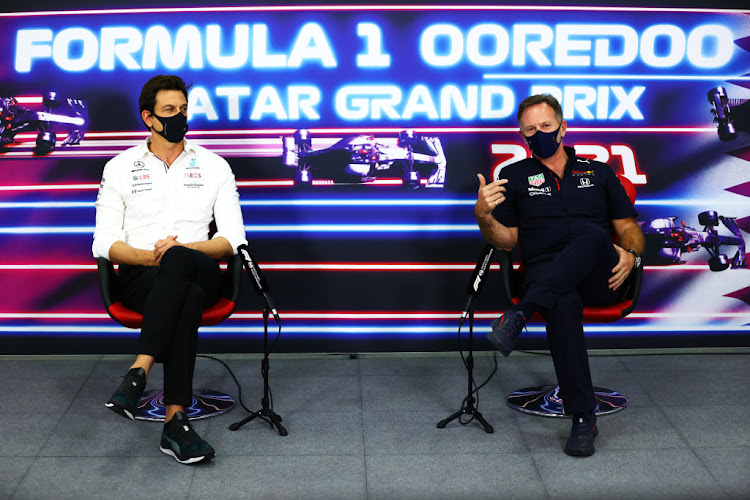 Formula One stewards rejected on Friday a Mercedes request to review a decision not to penalise Red Bull's championship leader Max Verstappen for a Sao Paulo Grand Prix incident with Lewis Hamilton.

They said in a statement ahead of the Qatar Grand Prix that while Mercedes had presented new and relevant video evidence from Interlagos, it was not significant.

"The competitor’s position is that this new footage provides sufficient information for the stewards to come to an altogether different conclusion than they did previously," they explained.

"However, the stewards determine that the footage shows nothing exceptional that is particularly different from the other angles that were available to them at the time, or that particularly changes their decision..."

To meet the conditions for a Right of Review under the sporting code, a team must present evidence that is significant, relevant, new and that was previously unavailable to the parties concerned.

The pair went off track on lap 48 as Hamilton tried to pass and Verstappen defended aggressively in a move that the Briton's Mercedes team felt should have drawn a time penalty for the Dutch youngster.

Had they done so retrospectively, Verstappen risked losing more points.

The stewards took note of the incident during the race but concluded, on the basis of the evidence they had, that no investigation was necessary.

They heard from Mercedes, who lead Red Bull in the constructors' standings by 11 points, and Verstappen's team at the Losail circuit on Thursday.

"We wanted to trigger discussion around it," he told reporters. "I think that objective is achieved. We didn't really think it would go any further."

"It would have opened Pandora's box regarding a whole bunch of other incidents that happened at that race," he said.

Seven-time F1 world champion Lewis Hamilton dismissed speculation about the steering of his Mercedes on Thursday and said the column was changed in ...
Motoring
5 months ago

Lewis Hamilton and Max Verstappen take their title battle into the unknown this weekend as Qatar hosts a Formula One grand prix for the first time at ...
Motoring
6 months ago