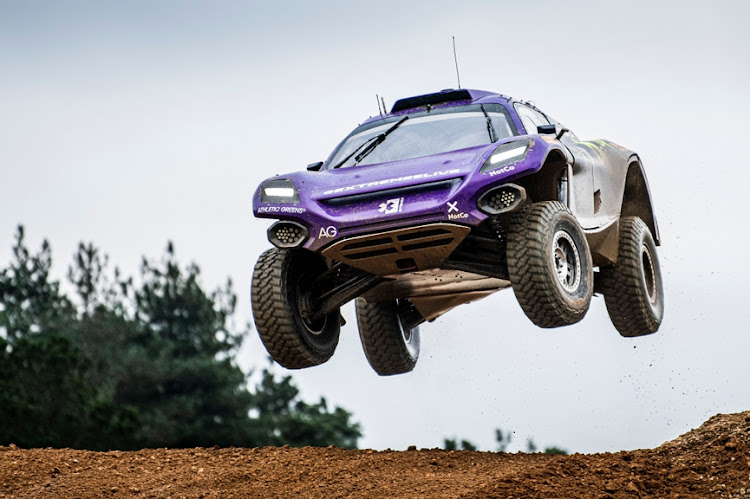 The off road series for electric vehicles aims to raise awareness about climate change.
Image: Supplied

The contest between the former Formula One team mates and world champions-turned-owners, neither of whom drove, was settled in a final Jurassic X Prix in southern England.

Rosberg X Racing's Johan Kristoffersson and Molly Taylor finished fourth in the event won by X44 drivers Sebastien Loeb and Cristina Gutierrez to finish level on points but ahead 3-1 on wins.

It was the second weekend in succession Hamilton had lost out, the Mercedes driver beaten by Red Bull's Max Verstappen in his bid for a record eighth Formula One championship in Abu Dhabi last Sunday.

Hamilton and Rosberg, the 2016 Formula One champion, were previously team mates at Mercedes.

"We came into Extreme E to raise awareness of climate change, and promote sustainability, but also as a racing team we want to win so we will remember this feeling forever," said Rosberg.

Series founder Alejandro Agag was happy with how the inaugural season had gone.

"It has not been easy in the middle of a pandemic but we have delivered five X Prix events and the final in Dorset produced some spectacular racing," said the Spaniard.

The final round was at Bovington, an extensive and off-limits area of forest and heathland used by the British army for tank and artillery training.

The series, with identical SUVs and male and female drivers in every lineup, aims to raise awareness about climate change and promote sustainability by racing in remote and damaged environments.

Other rounds were in Saudi Arabia, Senegal, Greenland and Sardinia after those scheduled for Brazil's Amazon and Argentina's Patagonia were cancelled due to Covid-19.

Red Bull's Max Verstappen collected his Formula One world champion's trophy at a gala awards ceremony on Thursday, and looked forward to fighting ...
Sport
1 month ago

Mercedes team boss says it's not a certainty that Lewis will race next season after the pain of being 'robbed' of a record eighth title.
Motoring
1 month ago

From F1 controversy to the rise of the electric car, it was a momentous year, writes Denis Droppa
Motoring
1 month ago