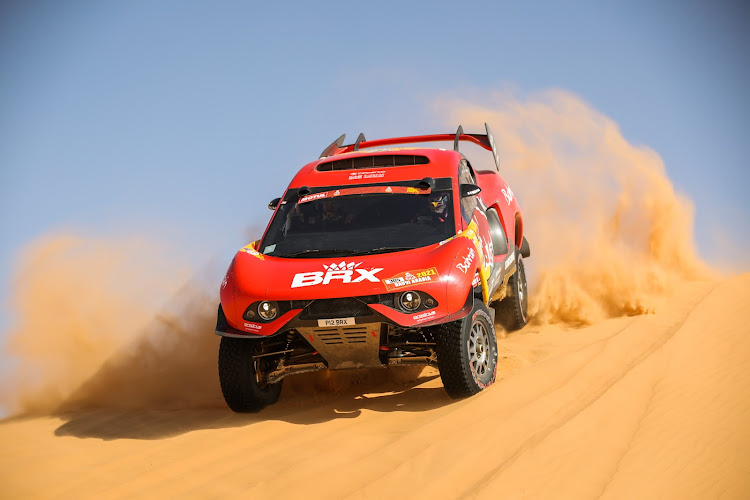 The 47-year-old Frenchman finished three minutes and 28 seconds ahead of the Toyota driver, who won Saturday's prologue and Sunday's first stage but had to go first and clear the way on Monday's 338km timed stage from Ha'il to Al Qaisumah.

The overnight bivouac was moved from Al Artawiya due to heavy rain, with a planned marathon stage cancelled.

Britain's Sam Sunderland took over the lead in the motorcycle category from Australian GasGas team mate Daniel Sanders, who lost his way and finished 23rd in the stage to drop to third overall.

"We missed a way point because we went one valley too far to the left. We spent a fair bit of time there trying to find it. I lost about 20 minutes, so it was pretty crazy," said the Australian.

Spaniard Joan Barreda was the stage winner on a Honda.

Former MotoGP rider Danilo Petrucci requested an airlift after his debut Dakar ended with his KTM suffering mechanical problems he could not fix.

Loeb's stage win was his 15th in the annual endurance event and first since 2019 as well as a first for Prodrive, the British motorsport company that runs the Bahrain Raid Xtreme team.

Argentina's Lucio Alvarez was a distant third overall, 40 minutes off the lead, in a Toyota.

Defending champion Peterhansel, nicknamed "Mr Dakar" for his success in the event on two wheels and four, resumed 23 hours behind triple champion Al-Attiyah after his car was sidelined with a smashed rear axle.

The Frenchman collected a 16-hour penalty as a result of that incident, blamed on a rock stuck between the chassis and a wheel, and said his main focus was to help his team mates and give Audi more data about the RS Q E-Tron car.

The Dakar, in its 44th edition, is the first major motorsport event of the year and one of the most dangerous and gruelling.

The rally started in 1978 as a race from Paris to the Senegalese capital, Dakar, but moved from Africa to South America for safety reasons in 2009. It is now held entirely in Saudi Arabia.

Earlier this year Audi revealed its electric contender for the 2022 Dakar rally. The gruelling competition is set to kick off on Saturday in Saudi ...
Motoring
4 weeks ago