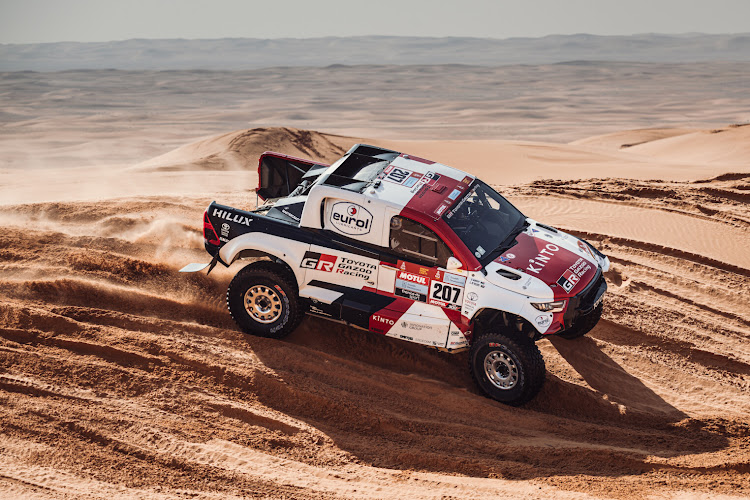 Frenchman Loeb, a nine times world rally champion, was second-fastest over the 611km loop near Riyadh to claw back nearly three minutes from his Qatari rival.

Triple Dakar winner al-Attiyah was eighth-fastest in his Toyota. Lategan, who is out of contention for overall victory, hit problems soon after the start.

“I was driving until the first control point with the door flapping open. Then I managed to solve that, I strapped myself in and couldn’t open the door,” he said.

“Then we had a puncture, so I had to climb out of the navigator’s door and change the puncture. So we’ve had just the craziest day. I can’t actually believe that we have won the stage. It doesn’t make sense.”

Al-Attiyah had the disadvantage of leading on the road, without motorcycles ahead to help with navigation by creating lines in the desert, and Loeb was able to pass him through the dunes.

“We took a few minutes from him; that was the plan in the morning, so we are happy with that. Big gains were not possible today, for sure,” said the Frenchman, who drives for the Bahrain Raid Xtreme team.

“Starting just behind him opening the road meant it was not possible to make a big gap.”

In the motorcycle category, former MotoGP racer and Dakar debutant Danilo Petrucci took his first stage win after Australian Toby Price was given a six-minute penalty for speeding.

Italian Petrucci, out of the overall reckoning, had finished second and four minutes behind. He was the first MotoGP rider to win a Dakar stage.

Britain's Sam Sunderland retained the overall lead for the GasGas team, some two and half minutes clear of Austrian KTM rider Matthias Walkner, with the bike riders taking a different route to the cars.

The motorcycle stage was stopped shortly after midday for safety reasons due to the demands placed on the medical support aircraft.

Spaniard Carlos Sainz won the third stage of the Dakar Rally in Saudi Arabia on Tuesday with his Audi team celebrating a first for an electric ...
Motoring
1 week ago

Qatar's Nasser Al-Attiyah won the fourth stage of the Dakar Rally in Saudi Arabia on Wednesday.
Motoring
1 week ago