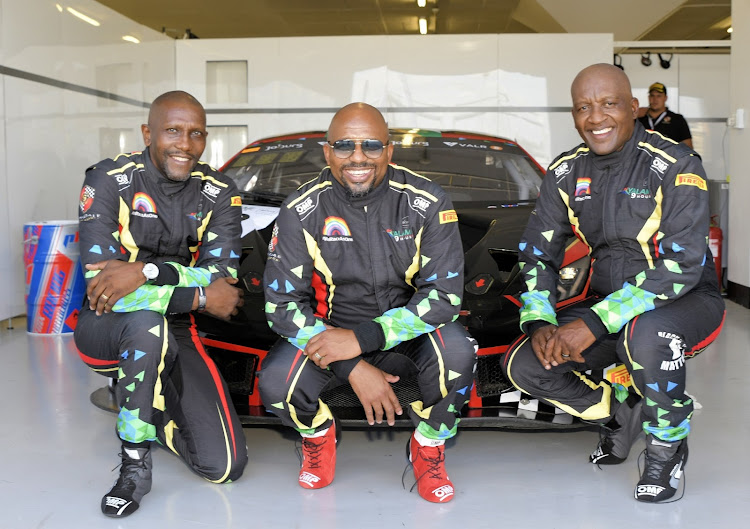 (From left) Tschops Sipuka, Xolile Letlaka and Phillip Kekana made history at the Kyalami 9-Hour race as the first all-black team to compete in the international GT3 series. Picture: SUPPLIED

The Africa Race Together (ART) Foundation was revealed on the grid minutes before the Kyalami 9-Hour on Saturday.

The brainchild of businessman and motorsport enthusiast Xolile Letlaka, the mission of the non-profit foundation is to initiate sustainable investment in talent, communities, events and organisations to grow motorsport at a national and international level.

Through his Into Africa Mining and Exploration business, Letlaka became the title sponsor of the Stradale Racing Team, whose driver Charl Arangies, became the SA GT Challenge Champion in 2021.

To create more diversity in motorsport he formed a development VW Polo Cup team, giving talented SA youngsters a chance to hone their skills through a progressive ladder of opportunity, starting from karting.

Through his initiative, he has already given Stuart White and Lonika Maartens an opportunity to compete overseas to further their careers.

Letlaka, with co-drivers Tschops Sipuka and Phillip Kekana, made history by becoming the first all-black African crew to contest the Kyalami 9 Hour. They finished ninth in their Stradale Into Africa Lamborghini Huracán GT3 Evo.

The ART Foundation aims to attract youngsters into the sport across all structures including engineering, mechanics, catering, logistics and media.

The foundation will embark on a roadshow, visiting high schools and tertiary institutions across SA to identify talent in the maths, science and technology fields with a view to offering bursaries to further their careers and recruit students into the motorsport industry.

The pilot programme has already borne fruit with the establishment of an all-black crew of drivers, mechanics and engineers who competed in the East London round of the 2021 SA Endurance Series in a Backdraft Roadster, funded by Into Africa.

In addition to his sponsorship of the Into Africa Mining Stradale Team and ART Foundation leadership, he has also become the first black motorsport promoter, registered with Motorsport SA, after acquiring the rights to the SA Endurance Series, the business responsible for running the SA GT Championship and Southern African Endurance racing.

Letlaka has already made his mark by gaining national championship status for the SA GT Championship, which features a seven-round calendar in 2022.

The Haas F1 team has shown the world what its new 2022 challenger will look like when it arrives at Spain's Circuit de Barcelona-Catalunya for ...
Motoring
4 months ago