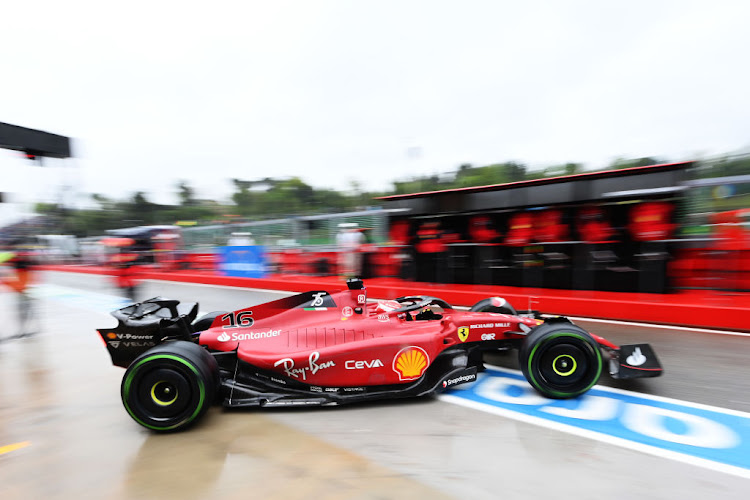 The 24-year-old Monegasque lapped Imola's Enzo and Dino Ferrari circuit in a fastest time of one minute and 29.402 seconds on intermediate tyres, with Spanish team mate Carlos Sainz 0.877 seconds slower.

Red Bull's reigning world champion Max Verstappen was third fastest with a time of 1:30.867, followed by the two Haas drivers Kevin Magnussen and Mick Schumacher, one of several spinners.

Seven-time world champion Lewis Hamilton was only 18th in a session that started with full wet tyres before conditions improved enough for some to venture out on intermediates.

Team mate George Russell, second in the championship but 34 points adrift of Leclerc, was in 10th place.

McLaren's Lando Norris brought out red flags five minutes from the end when he went into the gravel but was able to return to the track.

Imola is the first European race of the season and also the first of three in the sprint format, with qualifying later on Friday to decide the starting grid for a 100km race on Saturday that establishes the order for Sunday's main event.

In a change from last season, the official pole position for the Formula One record books will be awarded on Friday rather than Saturday.

My sister made me support Arsenal, says Chelsea bidder Hamilton

Lewis Hamilton spoke on Friday of his excitement in joining a bid to buy Premier League side Chelsea, saying he was a lifelong soccer fan who had ...
Motoring
3 weeks ago

Ferrari's Formula One championship leader Charles Leclerc said he was fully focused on his Italian team's Imola homecoming this weekend despite being ...
Motoring
3 weeks ago

The massed ranks of Ferrari fans will be hoping to celebrate a triumphant homecoming at Imola on Sunday after Charles Leclerc's early season ...
Motoring
3 weeks ago