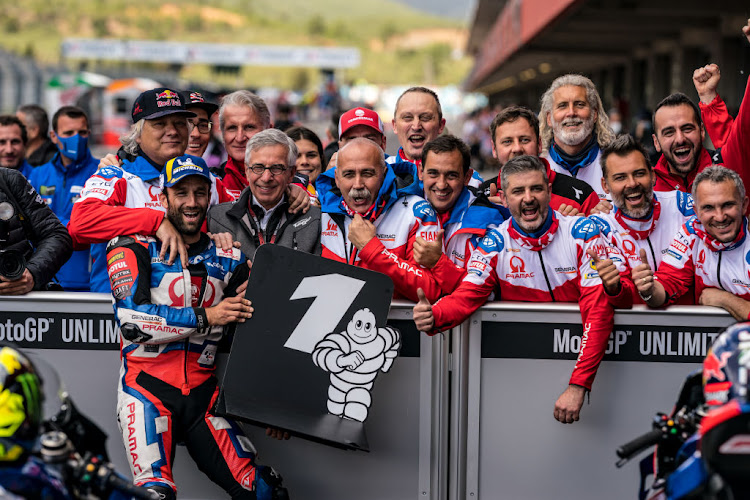 Zohann Zarco celebrates with his team at parc ferme after their pole position during the qualifying day of the MotoGP Grande Prémio Tissot de Portugal at Autodromo do Algarve on April 23, 2022 in Lagoa, Algarve, Portugal.
Image: Steve Wobser/Getty Images

With the track experiencing heavy rain in the buildup, the first qualifying session (Q1) was witness to a number of crashes as Zarco's late rally pushed Suzuki Ecstar's former world champion Mir into second, with Espargaro finishing third on his Aprilia.

"Pretty happy. I did not expect this," said Zarco. "The best strategy today was to stay out on the track on the same tyres for the whole 15 minutes."

"I hate to say this, but I was scared," said Espargaro, who won the Argentine Grand Prix earlier in the season. "The wet patches were very slippery ... you had to stay focused. For me, this is like a victory."

Bagnaia's team mate Jack Miller will start fourth on the grid, with reigning champion Fabio Quartararo fifth on his Yamaha.

Six-times world champion Marc Marquez, who looked set for pole in the final stages, was bumped down to ninth after his lap time was cancelled following yellow flags that were deployed due to a crash involving Pol Espargaro.

George Russell was surprise fastest for Mercedes in the final free practice ahead of Formula One's first sprint race of the season at Imola on ...
Motoring
3 weeks ago