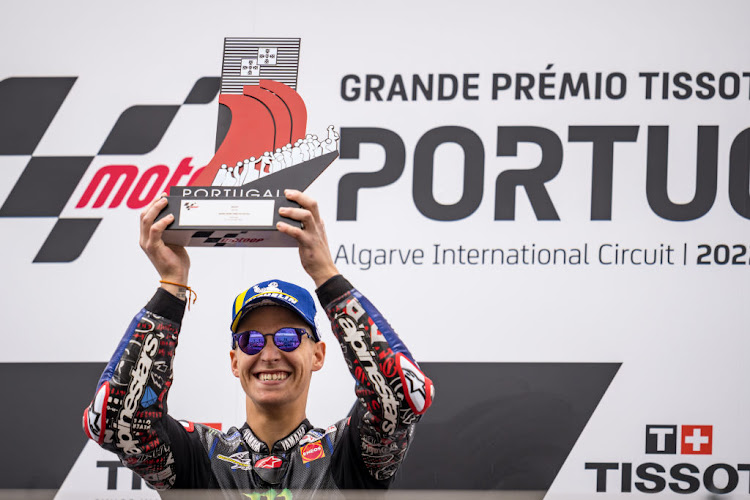 Fabio Quartararo celebrates his win with his trophy on the podium during the race of the MotoGP Grande Prémio Tissot de Portugal at Autodromo do Algarve on April 24, 2022 in Lagoa, Algarve, Portugal.
Image: Steve Wobser/Getty Images

Reigning world champion Fabio Quartararo claimed his first win of the season with a dominant performance at the Portuguese Grand Prix in Portimao on Sunday, while pole-sitter Johann Zarco held off Aleix Espargaro to finish in second place.

Quartararo disappeared into the distance at the Algarve International Circuit, and his and Yamaha's first MotoGP victory since Silverstone last season moved him level with Suzuki rider Alex Rins on top of the championship standings.

An emotional victory for the reigning Champ! 🏆#PortugueseGP 🇵🇹 pic.twitter.com/YBuaZOQUNc

With seven laps remaining, Jack Miller took down Joan Mir while attempting to pass the 2020 world champion in the battle for the podium, allowing Zarco and Espargaro to finish second and third.

Mir's team mate Rins moved up to fourth having started 23rd on the grid while Ducati's Francesco Bagnaia, who exited Saturday's qualifying early after hitting a wet patch, finished eighth after storming back from last place.

George Russell was surprise fastest for Mercedes in the final free practice ahead of Formula One's first sprint race of the season at Imola on ...
Motoring
4 weeks ago