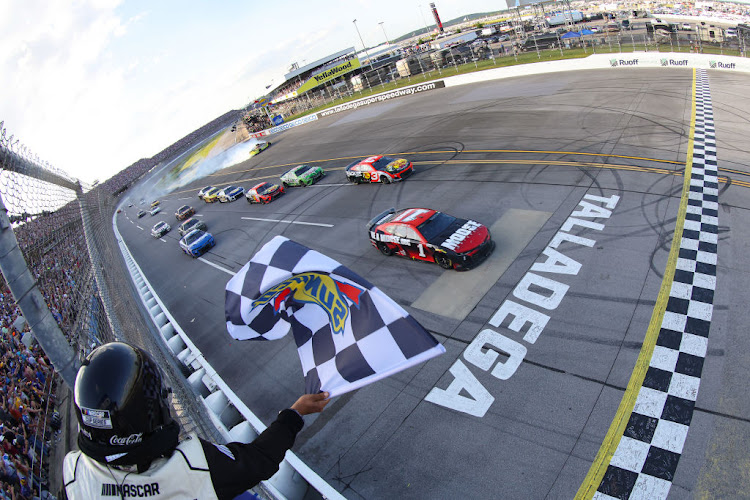 Running third off turn 4 to Jones and then-second place Kyle Larson, Chastain stayed low and watched Larson go high for the pass and Jones move up for the block.

"I'm always the one going to the top too early and making the mistake," said Chastain, who celebrated his usual way by smashing a watermelon onto the track and eating some during his interview.

"I was like, ‘I'll just ride at the bottom.' I'm not going lose the race for us.

"(Jones and Larson) just kept going up and moving out of the way."

Chastain recorded his second career Cup win by comfortably beating Austin Dillon to the stripe. The Florida native was triumphant for the first time last month at the Circuit of the Americas in Austin, Texas.

Kyle Busch finished third, followed by Larson and Martin Truex Jnr  in the 188 lap race that featured five cautions at the 2.66-mile venue.

Jones was trying to put a Richard Petty-owned car into Victory Lane for the first time in 280 races – dating back to Aric Almirola's win at Daytona in 2014.

"We were single file and I felt pretty good about it," said Jones, who led 25 laps and finished sixth.

Looking back, I wish we'd have stayed on the bottom and let the 1 (of Chastain) push me.

"I didn't know they were coming with that much speed. Obviously, the defence of the 5 (of Larson) opened the door for the 1."

As stage 1 neared its end, Daniel Hemric's Chevrolet blew up going in to turn 3, and the No 16 slowed and was spun by Austin Dillon's No 3. Hemric went up the traffic to collect the cars of Chase Briscoe and Chris Buescher.

Bubba Wallace notched the opening stage-win, scoring his first of 2022 and third career at high-banked Talladega, where he won last fall.

With 31 laps to go in stage 2, Wallace's No  23 Ford made contact with Logano's car, sparking the race's biggest incident – nine cars – in turn 1.

William Byron worked his way to the front and clinched stage 2, his third stage-win of the season, edging teammate Chase Elliott.

On lap 129, Wallace pushed Ryan Blaney past Kyle Busch and to the point, and the lead cars logged laps by running nose-to-tail before the final pit stops began with 30 circuits to go.

Denny Hamlin emerged with the lead, followed by Larson, Jones, Byron and Chastain to set up the final run to the checkers.