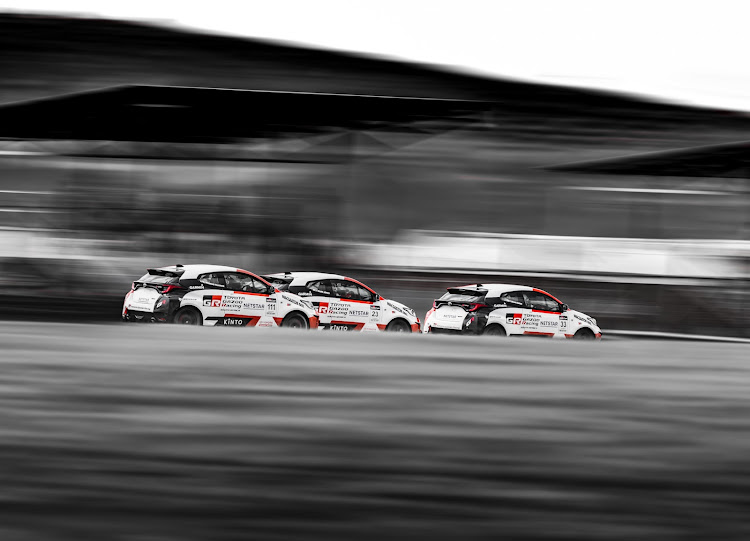 The second round of the Toyota GR Cup started off well for the TimesLIVE GR Yaris. After arriving at Zwartkops Raceway early on Friday morning, I managed to put this pugnacious little Toyota right at top of timing sheets in two out of the three practise sessions. Yep, when I got home later that evening I was feeling pretty pleased with my efforts.

It was another early start on Saturday morning with an 8.20am qualifying session that married cool ambient air (great for the car's 1.6l three-cylinder turbocharged engine) with optimal track surface conditions. Sure, the 10 minute window didn't allow for many laps, but after glancing at my Garmin Catalyst as I crossed the start-finish line for the fourth time it was evident that I didn't need any more as I had managed to clock a rather snappy 1:12.161. Confident that this time might not be bettered, I made my way back to the pits early to save my tyres and brakes for the first heat. In the end it was a good call because my performance were rewarded with pole position — my first of the series so far. 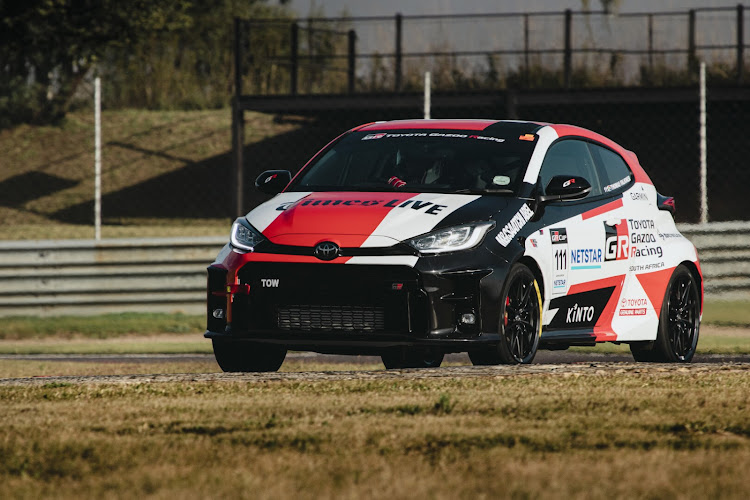 Although he didn't manage a win, Falkiner did get it together to clock a rather rapid qualifying time of 1:12.161.
Image: Supplied

Life was good. I helped myself to a Nespresso in the Toyota hospitality area, posed for photographs and generally felt on top of the world knowing that I would soon be starting the first heat at the sharp end of the pack. I had even gone faster than the fasted CompCare Polo Cup Car in their morning warm-up — 1:12.325. Sure, the Polo race cars operate with slightly less power and torque than our Toyotas do, but we carry more weight —  a combined driver/vehicle weight of nearly 1,400kg vs a minimum of 1,200kg for the VWs. Some might view this as an unfair comparison, but within the realms of the National Extreme Festival I'd say these two classes are the most evenly matched.

So far so good. However, fast-forward to the first heat and that's where things started to quickly swing to the opposite end of the Awesome-O-Meter. You see, when the Toyota GR Cup began it was unilaterally decided that this one-make series would use a rolling start procedure. This means that after leaving parc fermé we all do a quick warm-up lap en route to stopping at our grid positions on the start-finish line. Once in position we follow the safety car around for another lap while holding tight formation. As soon as the pace car ducks back into the pits the lead car dictates the pace down the start-finish straight and when the lights go off that's when the racing begins. Simple, right? 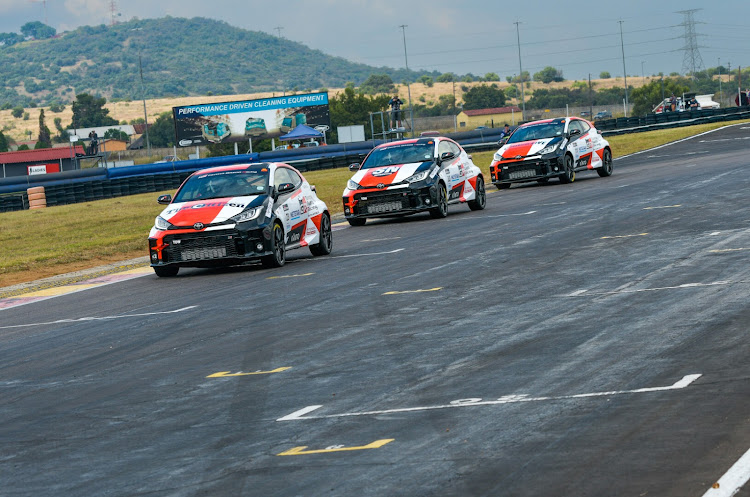 The first heat was a closely contested battle between Nurse, Jones and Falkiner.
Image: Supplied

It usually is, but this time it ended in mass confusion. After lining up on the grid we got flagged away, but failed to intercept any pace car. So we again stopped behind the start-finish line and got waved off for a second time where, as the designated pole-sitter, I was still expecting to rendezvous with the safety car around the first corner where the pit-lane exit feeds out onto the circuit. As I pulled off gently, Mark Jones (The Citizen) and Sean Nurse (SN Productions) both took a gamble, put the hammer down and raced towards the Zwartkops hairpin. Instinct took over and I followed suit. And as I rounded the first bend it became painfully evident that there was no safety car coming — the start procedure had inadvertently changed from rolling to standing and I'd just been mugged by the two opportunists in front of me. Cue a barrage of expletives from inside my helmet.

Over the next eight laps I set about clawing my way back up the grid — always a challenge when you're racing against cars so evenly matched. Halfway through I managed to dive down the inside of Jones at the exit of turn eight, made it stick and set my sights on reeling in Nurse. And just as I was getting within striking distance on the final lap I fluffed a gear shift from second into third coming out of turn two, which enabled him to put just enough distance between himself and me to claim victory by 0.583 seconds. Third went to Ashley Oldfield (cars.co.za), fourth Mark Jones, fifth to newcomer Anan Pather, sixth to Lerato Matebese (Top Gear SA) and sixth to Jeanette Kok-Kritzinger (Wiele 2 Wiele). 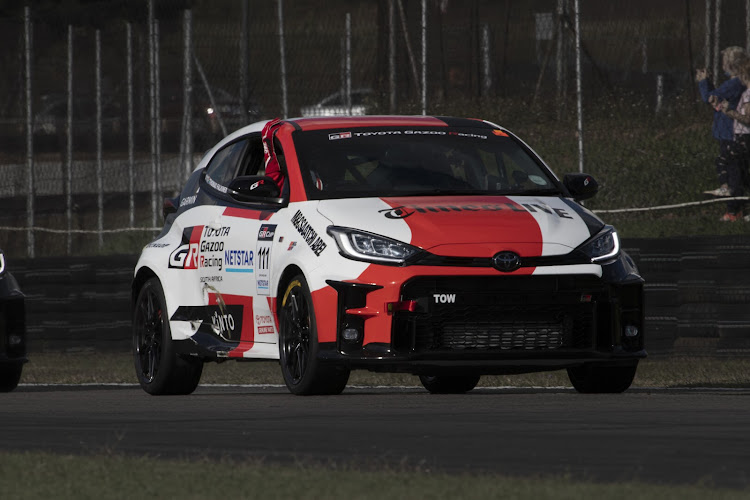 Falkiner waves to the crowd after finishing heat two. Notice the damage to his door after a gentle 'love-tap' from competitor Jones.
Image: Supplied

I guess finishing second wasn't too bad, but after such a strong showing in qualifying I had my heart set on a win. Regardless, it was still an immensely entertaining first heat with the cars considerably closer than they were back at Killarney in February.

So how did the second heat go? Well fortunately this time around we managed to get the start procedure right and from there I was able to edge past Nurse going into turn one. However, just as I thought I had got the jump on the rest of the GR Cup pack, Oldfield made a surprise attack down my inside — where I'd foolishly left the smallest of gaps — and managed to lead the field coming out of the hairpin. Pushing too hard chasing him into turn four saw me scrub off speed; a mistake that let Jones close right up to my tailpipes and ultimately squeeze past me into turn five — a manoeuvre that ended in his left front fender and wheel rubbing against the side of my car with a grating sound.

From here on the two of us had an almighty battle all the way to the checkered flag: a heated game of cat and mouse that left precious little space between our identical red, white and black Toyotas, especially through corners six, seven and eight. This dogfight let Oldfield run away with proceedings up front despite losing full use of fourth gear — an incredible drive it must be said. Jones finished second, me third, Nurse fourth, Matebese fifth, Kok-Kritzinger sixth and Pather seventh after going off deep into the gravel at turn five.

After the final results had been confirmed and tallied it was Oldfield and cars.co.za who emerged triumphant at the second round of the Toyota GR Cup. Yours truly and the now battle-scarred TimesLIVE GR Yaris claimed second overall and Jones third for The Citizen.

Next up is another away race that will take us to the fast and sweeping curvature of the Aldo Scribante Circuit on the outskirts of Gqeberha. I've never raced on this 2,480km track, but I'm looking forward to the challenge it will no doubt provide. Practise begins on Friday May 27 with the usual two heats playing out across Saturday May 28.

As usual stay tuned for more GR Cup updates as and when they happen.

Friday marked the start of the second round of the Toyota GR Cup at Zwartkops Raceway. Forming part of the National Extreme Festival, I and the five ...
Motoring
4 weeks ago

It's been over a week since TimesLIVE Motoring competed in the inaugural Toyota GR Cup race held at Killarney International Raceway. And while we ...
Motoring
2 months ago

After months of build-up it was finally lights out on Saturday for the 2022 Toyota GR Cup at Cape Town's Killarney International Raceway.
Motoring
2 months ago