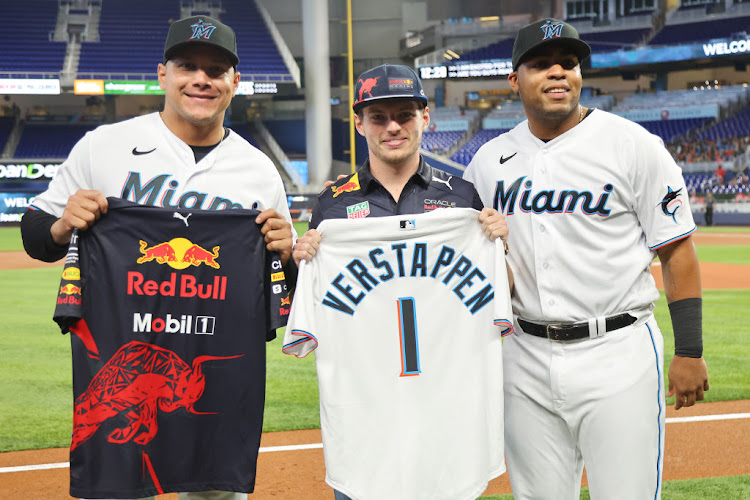 Avisail Garcia, left, and Jesus Aguilar, right, of the Miami Marlins pose for a photo with F1 driver Max Verstappen before the game against the Arizona Diamondbacks at LoanDepot Park on May 4 2022 in Miami, Florida.
Image: Michael Reaves/Getty Images

Michael Jordan, David Beckham and 'The Rock' are among the celebrities expected to flock to Formula One's first Miami Grand Prix as the sport’s popularity in the US surges into new realms.

After a series of failed attempts to break into the American market in the 1980s, the country looked a lost cause for the world's most popular motor racing series, with fans preferring the familiar names of Nascar and the domestic IndyCar open-wheel series.

Yet many in F1, including seven-times world champion Lewis Hamilton, believe times have changed.

“Growing up knowing how amazing the sport is and seeing that there was still quite a disconnect between the US and the rest of the world in terms of the passion for this sport, it's really amazing to see that we've cracked it and there's a growing love in the States,” said Mercedes driver Hamilton.

The Miami race, which rapidly sold out, is the fifth round of the season and, along with the long-established race in Austin, Texas, it is one of two in the US this year.

In 2023 there will be three, with Las Vegas debuting.

Austin drew the biggest F1 crowd of the season last year, with a total three-day attendance of 400,000 and the sport is benefiting from the success of the Netflix series Drive to Survive which has created a buzz around the drivers and teams.

F1, which now has American owners in Liberty Media, has a major broadcast deal in the States with ESPN which has also helped push it further towards the US sports mainstream.

Sports marketing experts agree that F1 has truly broken through in the US.

“The sport brings a bit of European glam to the auto race scene in America, at a time when audiences may be tiring of the same-old, same-old Nascar and Indy Car events,” said Bob Dorfman, sports marketing analyst at San Francisco’s Pinnacle Advertising.

“Thanks to the success of Drive To Survive, a strong American marketing focus by Liberty Media, serious broadcast efforts by ESPN, compelling driver personalities and rivalries, cool cars and exciting non-oval race venues, F1 is here to stay and grow,” he added.

It is a far cry from the days when F1 was mocked for its ill-fated attempts to 'crack' America.

The Phoenix Grand Prix was held on a street circuit in the Arizona city between 1989 and 1991 but was discontinued after the intense heat caused reliability problems, while the local annual ostrich races drew bigger crowds.

The 2005 US Grand Prix at the iconic Indianapolis Motor Speedway ended in a farce with tyre issues meaning only six cars took part in the actual race.

The cars using Michelin tyres withdrew after the formation lap, leaving only the six cars that competed on Bridgestone tyres to run. The event was cancelled in 2007.

F1's last attempt in Vegas was ridiculed for being a race in the Caesars Palace hotel car park and despite that experience, the Miami race is also taking place in a parking lot.

While Miami, a regular Super Bowl host venue, is a city that loves a 'big ticket' event and which frequently draws sports craving some South Beach glamour, it is also a tricky place to get the right set-up.

Whenever Miami was talked about as a potential race venue, comparisons were made with one of the sport's legendary street races — the Monaco Grand Prix, with the potential for race-side views of water and yachts.

But after a downtown venue was unable to be secured, Sunday's race will take place around an hour's drive from South Beach, inland at Hard Rock Stadium, home of the NFL's Miami Dolphins and their large car park in the much less glamorous Miami Gardens neighbourhood.

In an attempt to capture some of the Miami vibe, organisers have created a simulated marina with a dry-docked yacht and a boarded surface creating the impression of water for the television cameras.

While that may have upset some purists, it does not seem to have worried fans who have snaffled up tickets, including the pricier hospitality packages at a series of spots on the course designed as much for enjoying mojito cocktails as catching a view of Hamilton and his rivals.

“The Miami venue might not be the sexiest choice, especially considering all the flashy city streets available,” said Dorfman. “But the novelty and excitement of a first-time F1 event should prevail.”

“Miami is going to be an experience for all of us, for the racing community, for the fans out there watching, the fans that are going to be flying in who maybe have never been there before. The US has a lot to offer... So, it's super exciting.”

MotoGP promoters Dorna Sports have contacted Suzuki following reports the Japanese manufacturer will quit the premier class at the end of the season, ...
Motoring
2 weeks ago