King of the Hill records shattered at 2022 Simola Hillclimb 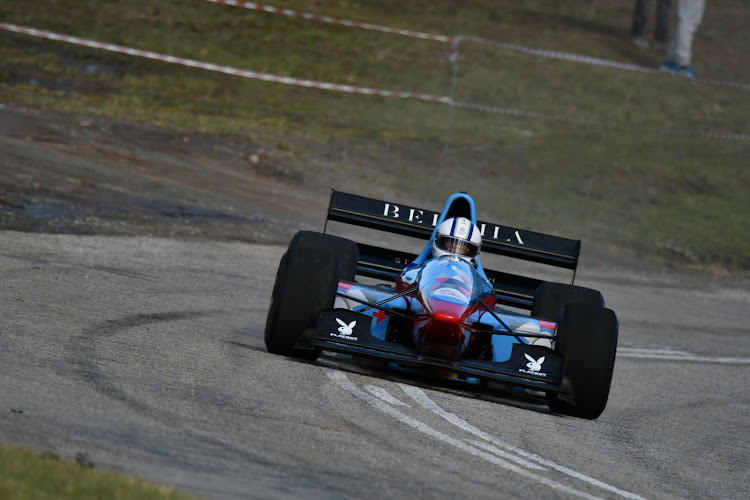 Andre Bezuidenhout clocked an astonishing time of 34.161 seconds in his final run of a day – a new Simola Hillclimb record.
Image: Supplied

The 12th edition of the Simola Hillclimb lived up to all the hype and anticipation, as fierce battles played out and records were smashed on the road to crowning this year’s King of the Hill title winners.

Andre Bezuidenhout secured his fifth consecutive Single Seater and Sports Prototypes victory – and his fourth in a row in the purpose-built 2007 Gould GR55 hillclimb racer – after steadily chipping away at his times during the two days of intense action.

Although the competitors had to contend with a mix of wet and dry conditions during the initial practice and qualifying sessions on Saturday, Sunday was dry and clear and Bezuidenhout set the scene for a thrilling Top 10 Shootout after coming within eight-hundredths of a second of his 2021 lap record during the Class Finals.

He didn’t disappoint the enthusiastic crowds in the all-or-nothing final dash on Sunday afternoon, going hell-for-leather to complete the 1.9km sprint in an astonishing time of 34.161 seconds, an impressive 0.8 seconds faster than his previous record from 2021. In the process, he achieved an average speed of 201.18 km/h – from a standing start.

“I thought that we could go about two-tenths quicker than last year, but the team has done an amazing job with the car and we’ve been testing for the last six weeks,” Bezuidenhout says.

“It was the right moment today as the car was perfect, the heat was ideal and everyone went faster in the final heat. I had a great run and I’m glad that we could win for the fifth time, as I’m not getting any younger.”

Bezuidenhout vowed to be back in 2023, even more competitive. 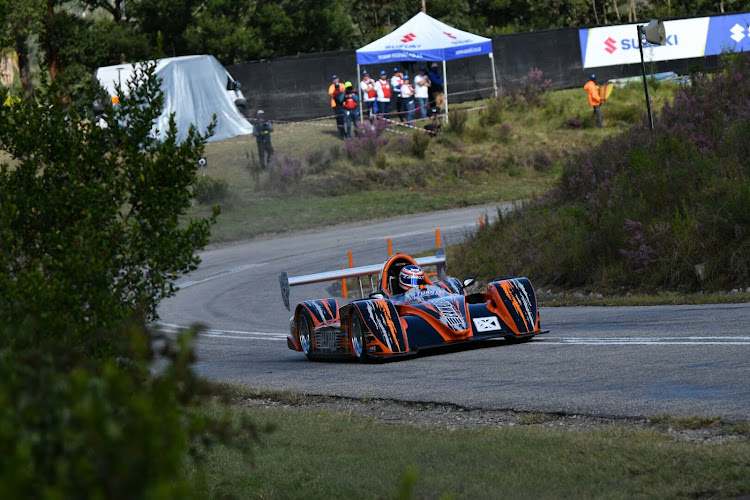 Robert Wolk was once again Bezuidenhout’s closest challenger for the overall title and in Class C3. He also competed in a specialised hillclimb car, but one that was built in 1989 in the form of the Pillbeam MP58.

The car has been brought into the modern era, having been beefed up with a full-fat Infinity IndyCar engine – although Wolk still had to wrestle with a four-speed manual gearbox to Bezuidenhout’s six-speed sequential paddle-shift transmission.

As the first outing in this configuration, Wolk’s team spent most of the weekend refining the car’s set-up, and eventually made crucial gear ratio changes for the critical Sunday afternoon runs. The results were immediately apparent as his times dropped from the 38-second mark to 37.290 seconds in the Class Finals, followed by an exceptional 36.335 seconds in the Top 10 Shootout. This gave him a hard-fought second place in the final standings.

Andrew Schofield was in contention for the final podium position in the 2003 Formula Renault V6, but he ran wide in Turn 3 in the Class Finals and slid sideways into the tyre barrier, ending his challenge on the spot.

Devin Robertson completed his weekend third overall in the Top 10 Shootout in the Suzuki-powered 1992 Radical SR1 ProSport, setting his fastest time of 39.515 seconds. He also won Class C5 in the process.

There was an epic duel between two talented youngsters in Class C2, with Byron Mitchell claiming fourth place overall for King of the Hill in his 2002 Formula VW (39.515 seconds) and the class title. Andrew Rackstraw (2018 Mygale Formula Ford) was a mere six-hundredths of a second off Mitchell in the Top 10 to end fifth.

Although Rackstraw was 0.042 seconds faster in the Class Finals, his time was deleted for clipping a corner marker.

Rui Campos powered his roaring Ford V8-powered Shelby CanAm to sixth in the Top 10 (40.805 seconds) and took the Class C6 win. Megan Verlaque was seventh in the final dash, posting her best time of 46.828 seconds in the tiny Suzuki-powered Speedcar Extreme cross kart. 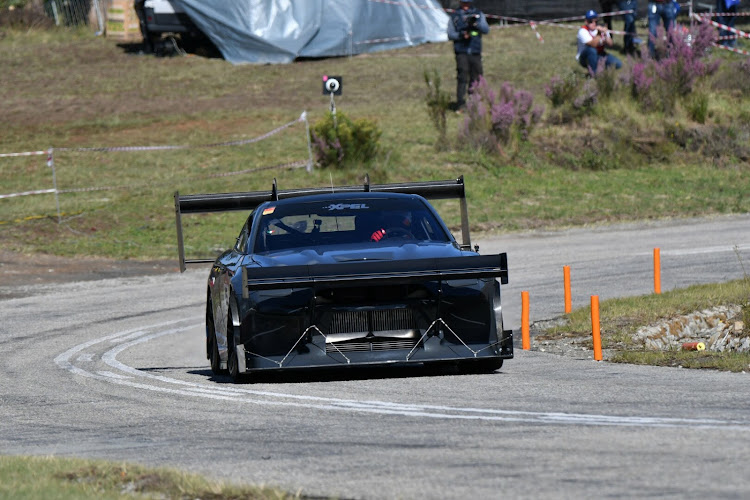 Franco Scribante narrowly missed out on his second consecutive King of the Hill title at last year’s 11th Simola Hillclimb, but he grabbed the 2022 crown in superlative style in his wild multi-winged 2016 R-35 Nissan GT-R.

A fascinating tussle emerged between Scribante and new protagonist Reghard Roets, who had moved up from the Road Car and Supercar category to take over the multiple King of the Hill-winning BB Motorsport 2013 Nissan R-35 GT-R previously driven by Wilhelm Baard.

The two leading contenders traded fastest times throughout the practice and qualifying sessions, but Scribante held an advantage of 0.7 seconds going into the Class Finals. The eagerly-anticipated contest ultimately faded as the Roets GT-R picked up electronic issues that had previously plagued this car.

He had to settle with runner-up position in Class B5, and didn’t start the King of the Hill Top 10 Shootout. Technical problems also hit Aldo Scribante in the 2011 Audi S4, relegating him to third in class.

Despite the lack of serious opposition, the ever-competitive Franco Scribante came within 0.08 seconds of a new saloon car record in the Class Finals (39.382 seconds), then threw everything at the Top 10 Shootout, despite also picking up some electronic troubles and losing fifth gear for the last two heats.

His do-or-die attitude paid off as he blitzed the Modified Saloon Car record by a remarkable 1.2 seconds, rocketing through the timing beam at 38.129 seconds.

“Reghard and I were trading places throughout Saturday, so I thought that’s what it would be in the finals but, unfortunately, he fell out of the fight.

Although, with that time I don’t know that anyone else could have matched it today, and it doesn’t get much quicker than this in a saloon car,” Scribante said. 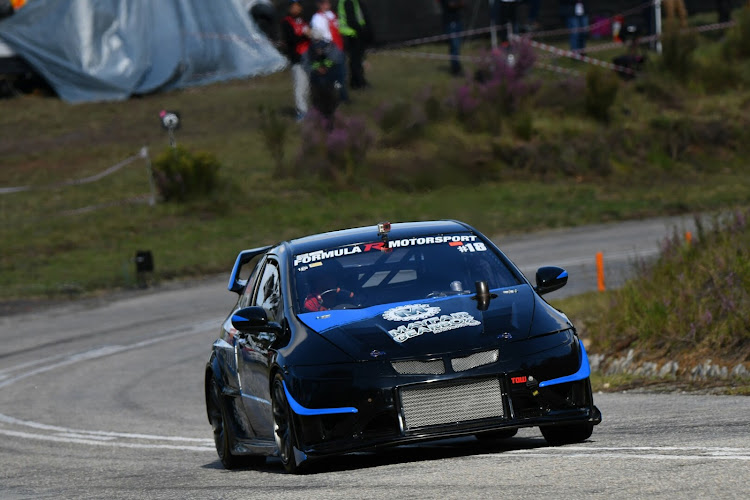 “It was basically the perfect run, considering we had to deal with a couple of glitches in the end, including bouncing off the rev limiter in fourth without having fifth gear,” Scribante added.

“We upped the boost pressure and the fuel pumps couldn’t keep up, so the car was running very lean at the end, and we’ll have to get bigger fuel pumps for next year. I’m sure we can do a 37 next time.”

Charl Joubert ultimately earned the runner-up position in his Honda V6-powered Lotus Elise in the Top 10 Shootout with his best-ever time of 39.278 seconds. He also won Class B4, beating Wade van Zummeren in his wild custom-built rear-wheel drive Nissan R34 GT-R in both instances – although Van Zummeren arguably earned the unofficial award for the wildest drive of the event.

2021 King of the Hill Pieter Zeelie had a difficult weekend, never finding the ideal set-up for the recent upgrades to his Toyota MR2 Super GT, eventually finishing fourth in the Top 10 and third in the Class Finals with his best time of 42.003 seconds – almost 1.5 seconds off his winning time last year.

In the Class Finals, Owen Bridger took Class B2 in his Honda Civic Type-R, beating Graeme Nathan in the VW Polo SupaCup race car by one of the closest margins in the history of the Simola Hillclimb of 0.016 sec, crossing the beam in 43.908 seconds.

Pierre Bester took Class B3 in the Mercedes-AMG A45 (46.799 seconds), with B7 going to Ricky Giannoccaro in the Lamborghini Gallardo Super Trofeo (44.390 seconds). Arnold du Plessis wrestled the hefty supercharged Nissan Patrol to the B9 win in 59.816 seconds. 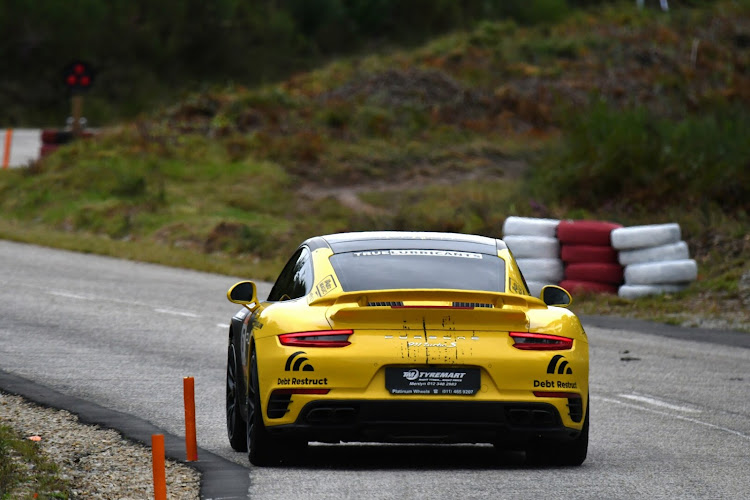 Jean-Pierre van der Walt made it a double win on the trot in the standard production car category driving his 2016 Porsche 911 Turbo S.
Image: Supplied

Jean-Pierre van der Walt made it a double win on the trot in the standard production car category, expertly pushing the 2016 Porsche 911 Turbo S to a winning time of 44.562 seconds, beating his time in the GT3 RS from last year by 1.3 seconds – although he was half a second off the current record held by Reghard Roets in a Nissan R35 GT-R from 2019. He also took the Class A4 win.

“I matched my fastest time from 2021, and in my final run today I actually could have gone a bit quicker. I went a bit too fast into the right-hander in the top section of the course so ran wide and it was then a tight line going up, but I managed to get the best out of it and got the win again, so I’m very happy,” Van der Walt said.

Farhaad Ebrahim was second-fastest in the Top 10 with a time of 45.916 seconds in his Toyota Supra, also winning Class A3. Gordon Nicholson claimed the final shootout podium position in his Audi R8 V10 Plus (46.032 seconds) along with the Class A6 win.

Garth Mackintosh was fourth overall in the McLaren 720s (46.318 sec) and took the A7 title, while Feroz Ebrahim ended fifth in the Top 10 in a second Toyota Supra (47.437 seconds). Jared Yeo was next in the Porsche 718s (49.412 seconds), and he took the trophy for Class A1. James Temple was seventh in the final heat in the supercharged Shelby Ford Mustang Terlingua.

Motoring journalist Ciro de Siena set a new all-electric vehicle record at the Simola Hillclimb of 49.231 seconds and finished a credible eighth overall in the Top 10 Shootout. He also snatched the Class A8 victory in the BMW i4 M50 that was specially flown in for the Simola Hillclimb, ahead of its local launch.

Jacques Wheeler rounded off the final shootout contenders, with a time of 49.641 seconds in the McLaren MP4-12C Spider. The final class win went to Sean Mackay in a 996-generation Porsche 911 GT3 (54.205 seconds).

For this year’s King of the Hill, 2021 Modified Saloon Car winner Pieter Zeelie received the meritorious Spirit of Dave Charlton award. Each year Zeelie has stepped up his game, and won the 11th edition of the Simola Hillclimb in spectacular fashion.

He is now taking his game to the next level, and is shipping his locally developed Toyota MR2 Super GT, powered by a turbocharged 3.5-litre V6 Toyota engine, to Europe to compete in the FIA International Hillclimb Cup.