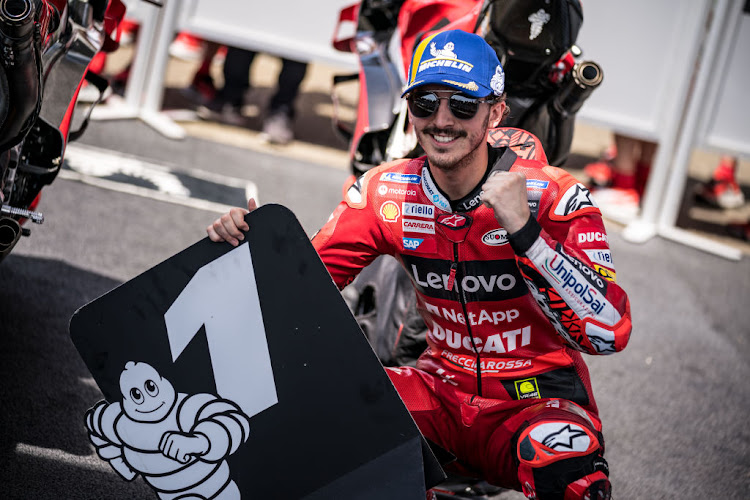 Ducati's Francesco Bagnaia claimed pole position for the French Grand Prix after finishing on top in Saturday's qualifying session, while world champion Fabio Quartararo of Yamaha could only manage fourth place on the grid in front of his home fans.

It was a second straight pole position for Bagnaia, who also earned top spot in qualifying for the Spanish GP in Jerez before bagging his first victory of the season.

Home favourite Quartararo got fans excited when he set the pace in FP4, but the Frenchman could not keep it up in Q2 and had to settle for the second row on the grid.

"I am not disappointed, we are not in P20, so it's okay and I feel our pace is great so I have no reason to be disappointed," Quartararo said.

"I feel really confident that even though Pecco (Bagnaia) will start first, we can fight for the victory."

Johann Zarco, the other local favourite, finished sixth on his Pramac Ducati but was later handed a three-place grid penalty for riding slowly and "disturbing another rider at the exit of Turn 4" after he got in Pol Espargaro's way.

Six-times MotoGP world champion Marc Marquez of Repsol Honda was left frustrated after he made a mistake on his final lap and could only finish 10th.

Four times Formula One world champion Sebastian Vettel said on Thursday climate change had made him question his job as a driver travelling the world ...
Motoring
6 days ago

Suzuki confirm they want to leave MotoGP at end of 2022

Former world champions Suzuki want to leave MotoGP at the end of this year and are in talks with promoters Dorna about the possibility of doing so, ...
Motoring
1 week ago

Last Sunday's inaugural Miami Grand Prix set a record for a live telecast of Formula One in the USs with an average viewership of 2.6-million, ...
Motoring
1 week ago